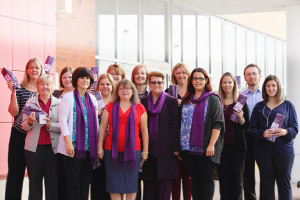 By Tabitha Wells
When it comes to violence against women, both in Canada and worldwide, the statistics are terrifying.

In Canada alone, 67 percent of the population knows someone who has experienced physical or sexual abuse, and in 2009 Statistics Canada released data showing that a staggering number of women over the age of 15 had reported experiencing sexual vio- pence.

While 473,900 women reported it, the numbers are likely higher as many women still fear the repercussions of speaking out.

November is Women Abuse Prevention Month in Canada, which seeks not only to raise awareness about how big an issue this still is, but also works to encourage women who are in abusive situations – whether physical, emotional, verbal, sexual or otherwise – to have the courage and strength to walk away.

Locally, in the last year, Family Transition Place has housed 115 women and 59 chil- dren in their emergency shelter, provided counselling support to 945 women, and had a number of women and children on their wait list.

They also received over 3000 calls on their 24-hour crisis and information hotline.

“We want the violence to end,” wrote FTP in a recent press release. “All year long, we engage the youth and community by providing education to help promote healthy rela- tionships and break the cycle of abuse.”

Last year, the Ontario Association of Interval & Transition Houses (OAITH) began a new campaign to coincide with Women Abuse Prevention Month, to provide a symbol of the courage it takes for a woman to leave her abuser. But with the symbol came the statement that often courage is not enough.

“It takes the strength of an entire community to end violence against women,” OAITH writes on their Wrapped in Courage campaign page.

The symbol they came up with was a purple scarf, to be ‘wrapped' around a person signifying wrapping those who need support in courage, and letting them know that their community is behind them.

According to statistics, between 20 and 30 women are murdered by someone they know each year in Ontario alone.

Calls for abuse, attacks and domestic violence against women is the second top reason for calls to emergency police services, and the effects of these situations on children is an overwhelming disturbance, causing them focus problems at school, struggles in relationships with peers and adults, and increases the risk of them participating in high-risk behaviours such as substance abuse or increased risk of anxiety and depression.

The Orangeville area is, unfortunately, no stranger to these kinds of violence. In April 1997, Ludvik Kirec killed his wife Helen, and their four children before setting fire to his house and killing himself. Shirley Snow succumbed to injuries following an act of domestic violence from her husband in May, 2002 when he ran over her several times with a mini-van in the Walmart parking lot.

More recently, tragedy struck the Bogner family when their daughter Heidi Ferguson, was shot to death by her estranged husband in September of 2009. Ms. Ferguson's family

has since decided to use her death to help spread awareness of domestic violence and support Family Transition Place through an annual fundraiser called the Ferguson Memorial Walk.

It can be easy for people to convince themselves that this kind of violence does not exist in their communities, but that is often the biggest problem. Domestic violence is

rarely something that is known when it is going on, and many often suffer in silence, behind closed doors and afraid of coming forward.

Campaigns like Wrapped In Courage, launched on Monday, help tell these women that they are not alone, and their community is there to support them and help them get back on their feet when they find the strength and courage to leave such situations.

“The Wrapped in Courage purple scarf campaign is an outward showing of support for the many women who have experienced or are experiencing domestic violence; to let them know they're not alone,” said Family Transition Place. “This month, we invite you to participate in showing your support to ending woman abuse by purchasing, wearing and telling others about your “Wrapped in Courage” purple scarf.”

The scarves are available for purchase at the First Street location of Scotiabank, as long as quantities last. They are $15 each, and Scotiabank will match the scarf sales made during November.