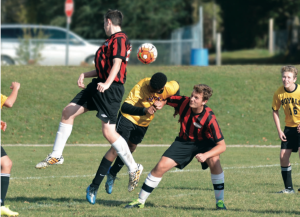 By Brian Lockhart
3-1 win in final game over CDDHS

The match was a highly competitive outing for the teams who finished one - two in the regular season standings.

The CDDHS team landed in first place with a 6-1 record - their only loss coming at the hands of the Westside team.

The Thunder lost only two games and finished in second place in the regular season before going on to the semi-finals and coming out on top with a 2-0 win over Norwell District on October 21.

In the final the Thunder came out hard in the first half and opened the scoring when Harrison McLeod found the back of the Royals net early in the match.

The Thunder were ahead early in the second half when Trent Peters headed the ball into the Royals net on a well timed move while surrounded by CDDHS players in front of the crease.

Centre Dufferin avoided the shut-out when they scored on a free-kick midway through the half.

The Thunder kept up the pressure for the rest of the game and opened up a few more scoring chances, but it wasn't there was less than three min- utes remaining that they could capitalize on an opportunity and August Walks-Kowalchuck buried the ball into the Royals net to make it a 3-1 game.