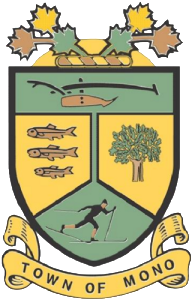 Conversion of the former style of streetlights to LED lights has caused problems, according to residents from Mono Centre.

The residents, who live in the small village surrounding the Mono Community Centre, say the new lights are intrusive

to their homes and properties, too bright, and causing excess light pollution.

“This article was spurred because I saw an article in the [newspaper] about someone writing in that they did not like the new LED lights in Orangeville,” said Kirsten Ball, a Mono Centre resident who appeared as a delegation at Tuesday morning's Mono Council meeting. “I spoke to other people in the village and found that a lot of people both at the amount of lights, and the effects of the LED lights. A number of residents have been commenting for years that the lights were too bright already, now the LEDs are even brighter.”

After speaking with her neighbours, Ms. Ball decided to do some research on LED light pollution and found that the issue is not limited to Orangeville and Mono.

“Residents in towns and cities all over are complaining about this issue,” she said. “It's contentious because people feel this lighting has been forced on them with no consultation. These lights negatively affect the well-being of residents by impacting their enjoyment of private property, increasing stress and anxiety and causing loss of sleep.”

She added that three specific lights in the village are the culprits; one at the street corner, and two more located on the east/west sideroad. Two are shining into several residents' homes, with the corner light shining into the homes of two more.

“I can literally sit on the stoop of my house at midnight and read a book clearly,” said Ms. Ball. “The tone the bulbs cast is a harsh blue-white light, and it casts such a bright light that it lights up the maple leaves outside my window. The lighting tends to be more of a glare as opposed to the soft, yellow glow of the previous bulbs.”

Part of the problem, she explained, is that the lights are situated unusually high, mounted on poles that sit above the hydro lines, as opposed to being lower.

“The light spills onto private property, it lights homes, lawns, shines onto windows and doorways and lights areas that people do not want lighted,” she said. “This is wasted light, and it is polluted light. Harsh light promotes anti-social behaviour. It is a deterrent for people to spend time outdoors.”

She went on to add that she isn't sure why lighting needed to be put into the village in the first place, as there had never been any safety concerns there.

“In the 25 years that I've lived in the village, there have been no break-ins that I'm aware of, no major car accidents, and when we moved here, there was no street lighting at all,” she said. “At night, it was pitch dark in the village. It was like that over 100 years ago, and everyone got on just fine.

So I'm not sure why it's become an issue in the last 10 years – it's obviously not to address safety, since we do not have a safety issue here.”

Some suggestions she provided to the Town to address the issue included providing better directional control (asserting that the lights currently do not cast directly on the roads), dimming or modifying the lights to minimize their intensity, putting them on a timer that turns off at midnight, or investing in softer coloured LED bulbs.

Mike Dunmore, Mono's director of public works, said that when the Town made the switch from the older style of lights to LED bulbs, they chose to forego a study as the lights followed a standard developed in 1992. Newer subdivisions were already set to newer standards.

“When we started this process, we found there would be an increased cost to assess the entire town with respect to lighting cri- teria,” explained Mr. Dunmore. “The Town of Mono decided at that time that the bulk of our lights met those criteria, and newer subdivisions were set through the new international standards for public safety. Because of this, we worked at a one-to-one replacement ratio for the bulbs.”

He added that a second reason they didn't proceed with the study was that it could have had a negative result for the Town, and for the hamlet of Mono Centre.

“The end result could have been on the negative side, finding that some areas, including [Mono Centre], could be considered under-lit, and we would be asked to install more,” he said.

Prior to the installation of lights, the Public Works department consulted with the manufacturer to ensure that the lights would fit the standards they were looking for. Each bulb uses 31 watts, which is the equivalent of what the former bulbs were emitting, and the effects of the light spray for each type of street light were also investigated.

“We were happy with the manufacturers light spray results at the time,” said Mr. Dunmore. “On paper, the spray was actu- ally reduced. But that was on paper.”

However, regarding why lights were ever installed in the hamlet area in the first place, Mr. Dunmore wasn't exactly sure.

“To the best of my knowledge, this hamlet was never officially studied,” he said. “I couldn't find any documentation to why the lights originally went in.”

Concerning the height of the street lights, Mr. Dunmore said he would also have to further investigate the reasoning, but it could be due to hydro.

“I believe Hydro One only allows us to install our lights above their hydro lines, but I will have to look into whether lowering the light is a possibility,” he said.

Members of council who had been out to look at the lights admitted that they, too, found they were exceedingly bright and casting more on properties than the roads. Councillor Sharon Martin added that she had seen similar new lights at Island Lake, and they were very pleasant, casting only on the roads.

According to Mr. Dunmore, the reasoning for that is the lights at the Island Lake subdivision have lantern-style lamps, which helps limit the cast of the glow.

Council passed a unanimous motion asking Mr. Dunmore to investigate possible solutions to the issue and bring a report back before council. Mr. Dunmore asked to consult with Ms. Ball, and will be considering all solutions, including the possibility of bringing the new bulbs into inven- tory and off the street lights.