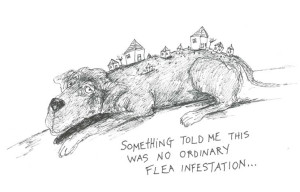 By Tabitha Wells
Artistic creativity can be expressed in millions of different ways, all adaptable, variable and changeable based on the perspectives, skills and views of the artist. Where one artist sees the beauty of the world through direct replication in brilliant colours, another sees it in black and white, and another still sees it in obscure designs moulding both humanity, still life and others into creatures of the imagination.

Gail Prussky, an artist from the outskirts of Shelburne, falls into the latter category. Her artwork takes form and shape in ways that the average eye wouldn't see; never directly duplicating life, but representing it through humourous pen sketches, strange combinations of people, animals and plants, and beautiful splashes of colours.

She moved from Toronto to get away from the city shortly before the Melancthon mega-quarry battle, and quickly became involved in the community through that fight. An artist by nature, she has a sketch-pad she carries everywhere, jotting down ideas when she gets them. She has never shown her artwork before, but was inspired by something that was said by the Highland Company to the community.

“They told us that we would be able to farm the the bottom of the pit, after they had dug below the water line and were finished with the land,” said Ms. Prussky. “I just thought the statement was hilarious and ridiculous, so I did a drawing of a farm in the middle of the pit. I put it on the Stop the Mega Quarry Page on Facebook, and people loved it.”

The reaction from people online helped her to realize that not only could she vent out her frustrations in her artwork, but that she actually had an audience who enjoyed her work, and it inspired her to start making her artwork more visible.

“I had never really showcased my work, but I started to put it on my Facebook page,” she said. “It's amazing to be able to draw, but it's even better to have an audience.”

Through everything with the Mega Quarry, Ms. Prussky met a lot of local people and began developing relationships with them, including with Nanci Malek from the Dufferin County Museum and Archives.

“When we first moved here, I went to the museum and just absolutely fell in love with the silo,” said Ms. Prussky. “I thought it would make a great art gallery, and wondered how you would get to do that.”

This Sunday, Ms. Prussky's wondering will be answered, as she hosts her first ever gallery at the Dufferin County Museum. She was recently approached with the idea by Ms. Malek with Museum Curator Sarah Robinson, and thought it was a wonderful idea.

She explained that she thinks part of the reason they thought of her was their push to find new ways to engage younger audiences and interest them in what the museum has to offer.

“Young people seem to respond really well to my artwork, and I think that's what the museum wants,” she said. “They're looking to bring something different to the museum, to take it in a new direction.”

Over the last few years, although she has not done a lot, Ms. Prussky has shown her art annually at the Silvercreek Show in Caledon, as well as had her work displayed in the window of Dragonfly Arts on Broadway.

“Having my work at the museum is exciting, and I think it shows that Sarah is not afraid to take risks,” she added. “Sarah seems fearless when it comes to bringing in newer and different types of shows to the museum. The edgier, the better. For me to show at the museum, everything came together like a perfect storm.”

Her exhibit, Gail Prussky: Raised in Captivity will officially launch this Sunday, November 1 at 2 p.m. in the Silo Gallery, and will feature 25 different pieces of her work, including Bunny Kong and The Arrogant Earwig.

Admission is donation-based, and the event will run until 4 p.m. For more infor- mation, visit the museum's website at www.dufferinmuseum.com.