Learning from Ashlyn and Lacy, Knights of Columbus ride again 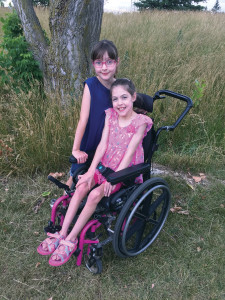 When a person sees a family just once a year, it is remarkable to observe the differences in the growth, learning and development of the children in that family. In this case, the annual visit is ours to the Coogans, where the children are eight-year-old twins, Ashlyn and Lacy.

There was every expectation that the girls would be hale and well at the time of their births. However, sadly, due to a series of complications, baby Ashlyn was born “flat” or not breathing, was subjected to a number of exceptional treatments to save her. She came out of it all, alive, cognitive and suffering from quadriplegia spastic cerebral palsy. In particular, cerebral palsy (CP) is caused by brain damage seriously affecting motor skills. In Ashlyn case, doctors felt she would be very limited, unable to walk or even crawl due to the severity of her condition.

They did not count on the determination, dedication and wisdom of her parents, Tom and Tammy Coogan.

As we sat in the kitchen this year, with the twins' mother, Tammy Coogan, we were impressed again, as we have been for the last three  years of visits, with the marvellous way in which Ashlyn has defied predictions made at her birth and her subsequent discharge from hospital.

Her successes can be attributed to many factors. First always is the child herself. “Just about up to par cognitively,” as Mrs. Coogan told us, young Ashlyn is humorous, a “thrill-seeker” and ambitious about the speed of the rides she likes to go on at amusement parks and eager to join in the fun with other children as far as she  can.

There have been many roads taken at the same time to assist this little girl in her progress to live life as fully as possible. Tammy and Tom Coogan have spent her life thinking outside the conventional medicine box, as it were, to find a variety of ways to aid their daughter in her progress.

Early on, they took her for Botox injections in her legs which relaxes the muscles and allows the legs to stretch rather than curl, the norm for CP sufferers. In this way, Ashlyn can walk with a walker at home and she can crawl. Both give her freedom to use the toilet and move around at will.

While away from the house, she is usually in a wheelchair, although she uses her walker in the malls. Throughout her young life, her parents have given her as much leash to do what she wants as they can. She sees herself as a normal eight year old but is frustrated by the impairment of her disabilities.

While we were talking about this, one of the twins asked why people stare at Ashlyn when they are out. Lacy could understand how another child might wonder about Ashlyn but she contended, “Parents should know what's going on!”

Having graduated from grade two, the girls had had “a good year” and were looking forward to grade three. For the summer, they continue to do homework, as Ashlyn's short term memory can be weak. So, an hour or so a day keeps them abreast of their school work and better prepared for the next year (as it would do any child). They were attending to this task while we were there.

It is the many technological aids in Ashlyn's life that have helped her so much with her learning and her ability to communicate, a major problem for her. Her vocabulary has improved with the help of augmentative communication devices.

The computer the girls were using while we were there is an efficient affair that can speak to her and has fenced keys that help her fingers stay on the right key while she struggles to type.

Gaining weight and height, naturally Ashlyn is outgrowing the equipment she needs, including her wheelchair. All the equipment the family has been assisted to purchase through the Knights of Columbus' help is carefully maintained so that they are still useful tools that can be passed on to other families.

The girls attend school in separate classrooms which arrangement has many benefits, including independence from each other (more peace at home) and the chance to make their own friends. Ashlyn has made new friends and kept her friends from other years. This has been the case since kindergarten and they have both done very well.

A word is needed here to sing the praises of the school they attend, St. Andrew's Catholic School where the administration and staff have been on broad, not only with assisting Ashlyn in every way but also all of the other children with special needs in the school.

Later in the day, we had a telephone conversation with Tom Coogan, who is now the manager of Zehrs in Orangeville. Mr. Coogan began his life in the grocery business at 14  in the Orangeville Zehrs. Since then, he has worked in many departments at the firm's many stores and is simply delighted to be back in Orangeville.

“I'm doing everything I can to be involved in the community,” he told us. “Everything that needs support, I hope that people will reach out to me. We are very aware as a corporation that, without the community, there is no business.”

So, the Orangeville store has become known for the active attitude of the management, taking part in the Knights of Columbus turkey draw, the Christmas hampers in conjunction with Home Hardware for needy families in the area.

Said Mr. Coogan, “I think sometimes people in our community have challenges... everyone deals as best they can. It's a little heart warming, Tammy and I do what we can to encourage people to reach out to us – there's a grieving process – there's people ... we've been able to help ... people need to be aware that, just because you have a disability doesn't mean you're not a beautiful person.”

Meanwhile,  eight-year-old Ashlyn with her life sentence of struggling to do everything most of us do easily, has almost daily seizures, an unending schedule of appointments, the spectre of surgery on her hips, a new heart monitor and on and on. She is nevertheless deeply loved and supported by family and friends.

And she is funny and willing to try many things – an example to us all.

The Knights of Columbus 8th Annual Charity Ride is scheduled for September 11, 2016. Registration and start up take place at the Orangeville Fairgrounds 247000 Sideroad 5 from 8:30 to 10:00 a.m.