Jonas & Barry in the Home: ‘disturbing and engaging’ 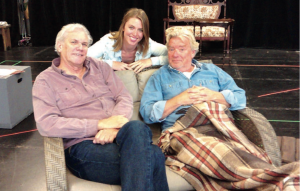 Sometimes a play is all plot and action and, on other occasions, it is more inti- mately character-based, where the ebb and flow, the story-telling is all in the conversations amongst or between the people in the play.

Certainly this is the case with the new Norm Foster play, Jonas & Barry in the Home,a tale about two older men who are in a seniors' residence, an “assisted living home,” opening as a World Premiere at Theatre Orangeville October 15.

Added to the two is Rosie, Barry's (played by David Nairn) daughter. It is for her that Barry has come to live in the home for she is employed as the social convener there.

Mutually agreed that this is the best move for Barry, a retired dentist, they both hope that the move also rekindles their own relationship.

This play is special as Mr. Nairn commented, “Because we've all worked together, there's a spirit of ease, a gathering of friends.”

Mr. Foster said openly, “I wrote this play with David and me in mind.”

He takes on the role of Jonas, a 70-year- old retired actor who may have started to forget his lines but never relinquishes his charm with the ladies.

Barry's daughter, Rosie, is played by Perrie Olthuis, most welcomed back to Theatre Orangeville, this being her fourth appearance here, following roles in Baco Noir, Team on the Hill and Melville Boys.

Derek Ritschel, who is also a friend and familiar face to this theatre, is directing the show. During our conversation with him and the cast in the first week of rehearsals, we wondered how the directing differed with such an experienced group of actors, with Messrs. Nairn and Foster so accustomed to working together.

His was a ready reply: “There's no way you could possibly not have fun again – they don't need directing – my job is just to be the fourth actor.”

However, Mr. Foster protested: “He's being too modest – he's done a lot of directing.”

Ms. Olthuis added, “This early in the rehearsals, he's already tracking some of the blocking.”

Firstly, it was Mr. Ritschel who reminded them all that Barry and Jonas “are meeting for the first time.” That perfect flow that keeps the tempo elegant between Mr. Nairn and Mr. Foster through their long association has to be tempered by the idea of a new relationship.

For the part of Rosie, Mr. Foster commented, “Perrie was our first thought for the daughter.”

Ms. Olthuis has had a satisfyingly busy summer and is very glad to be continuing her year's work with this engagement at Theatre Orangeville, especially with this theater family of friends.

While the World Premiere of Jonas & Barry is being presented here, it is already charted to go on to Lighthouse Theatre and Upper Canada Playhouse, with the three actors travelling with it.

Set designer Beckie Morris made sure that the set will travel and fit in the other theatres. Keeping the details of the stories within the play to themselves – “Come and see the play,” they insisted, they did discuss the emotional elements.

Said Mr. Nairn, “It's disturbing and engaging. Norm has a tremendous ability to show us things about ourselves but do it with humour and charm. There are moments in the play that people will find difficult,” Mr. Nairn cautioned us. Considering the subject matter, how could there not be?”

They talked about the writing, and Mr. Foster's talent for delivering a funny story, a rich comedy, laced with those poignant moments that can catch an audience off guard, as he presents life and people's reactions to it with real honesty.

Asked about his own ambitions, as it were, Mr. Foster was clear that he is having a wonderful time.

This is his 53rd play, most of which are being performed around the world throughout the years. Jonas & Barry in the Home is a little reminiscent of Mr. Foster's very successful On a First Name Basis, in that the content relies heavily on conversations between the actors.

It is Mr. Foster's talent for capturing exactly the way people actually talk to each with as little regard to perfect grammar as we ourselves have when speaking.

This makes his dialogue true and, more than that, absolutely fluid for the actors to deliver, so skillful is the rhythm and the seeming spontaneity to the flow.

Said Ms Olthuis, “There are some beautiful words. It's like butter.”

From the sounds of it, bring your han- kies but we think you may be wondering if your tears are from laughter or the pull on your heart strings.

All that to one side, Mr. Ritschel really summed it up with a flourish when he declared: “I defy anyone to come and see these characters and not walk out at the end totally feeling validated about the importance of theatre!”

Jonas & Barry in the Home opens at Theatre Orangeville next Thursday, October 15 and runs until November 1.

Tickets as usual at the Theatre Box Office and the Information Centre at Highway 10 and Buena Vista Drive, telephone 519-942-3423 or online at theatreorangeville.ca