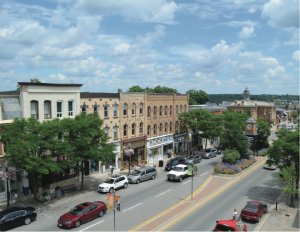 By Tabitha Wells
The Canadian Institute of Planners announced Wednesday that Orangeville's downtown Broadway has won the 2015 grand prize in its Great Places of Canada contest.

Earlier this year, it was announced that Broadway had been nominated for one of the categories, and yesterday it was confirmed that Orangeville's main drag had won both the Grand Prize and People's Choice awards as the Great Street in Canada.

“To be great, a street must be a destina- tion in its own right,” said contest juror Ben Petch. “Broadway fits the bill as an inviting place at the heart of Orangeville. Historic buildings, contextual redevelopment and attention to the pedestrian experience com- bine in a unique place enjoyed daily by shoppers, workers and visitors alike.”

Orangeville was the only location to become a double winner in their category, and will receive a stainless steal plaque to recognize the Grand Prize win.

“The jury was impressed by the central role Broadway plays in the community, along with the heritage character and streetscape design.”

In the description provided on the contest page, Broadway was described as the ‘hub of the community's social, cultural and economic activities'.

The description continued, adding that it was also very much a ‘kaleidoscope of all that's vibrant and interesting about the community's life.”

The Great Places in Canada contest was created as a celebration of what makes different Canadian communities unique.

It provides the CIP with the opportunity to share these communities and to recognize the work of professional planners across the country.

The Grand Prize is awarded by a jury of professional planners who assess each nomination based on a variety of planning merits under each category.

The People's Choice category is awarded solely on the basis of who receives the most votes through an online voting system.

The two other categories in both the Grand Prize and People's Choice sections included Great Nreighbourhood and Great Public Space.

The other two winners were from British Columbia, the grand prize for Great Neighbourhood going to West End Vancouver, and the prize for Great Public Space to Stuart Park in Kelowna. For the People's Choice Winners, Great Neighbourhood went to Ontario communities – Historic Downtown to Amherstburg, and Great Public Space to Labatt Memorial Park in London.

In a press release Wednesday morning, the Town of Orangeville offered congratulations to the other winners in the Great Places in Canada contest.