Codd takes over top spot on Junior A bench 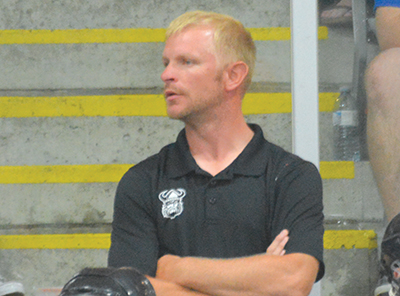 Bruce Codd, former head coach of the Orangeville Junior B Northmen has accepted the position of head coach with the town's Junior A Northmen team.

Fresh off back-to-back national Founders Cup wins with his B team, Codd accepted the position after speaking with Junior A Northmen GM, Bob Clevely.

“DJ Clevely stepped down after six years with the Junior A Team,” Clevely said. “We are lucky to get Bruce. He will take over the position immediately. He is now in the process of selecting his coaching staff.”

Former A coach DJ Clevely has decided to step down to pursue other options after several successful seasons with the Northmen. Codd, is a coach and former player who's long career included 12 seasons in the National Lacrosse League.

He played his final season with the Toronto Rock in 2012.

“I was talking to DJ this past summer and he said he was thinking about moving on and that was the end of the discussion. Then a couple of weeks ago I met with Bob (Clevely) and we sat down to have a chat and things went from there,” Codd said. “I was with the organization before as an assistant coach and worked under Bob at that point so obviously we were familiar with each other and we worked together over the past few years with the Junior B's and A's.”

to coach at this level. He also appreciates the fact that he will be able to work with, and scout new upcoming players.

“I played Junior A, I was an assistant coach for four years, this something I've really wanted to do. It's a great challenge. When I started coaching 20 years ago I definitely wanted to do this at some point, and it's here now and I'm excited.”

Between now and the start of the next season, which is still eighth months away, there's a lot to be done in the off season to get ready.

“There's a lot of things that have to be done. We take a look at what we have in our system, both returning Junior A players and potential players graduating up from Junior B and the Midget ranks. And obviously there's out of town players in terms of the Junior A draft which will happen in January

and we have to get ready for that. There's a lot of evaluating over the next couple of months. We have to put a coaching staff together as well. Right now I'm talking to different people and trying to figure out who those guys are that are going to assist me. We'll be making an announcement about that – probably sooner than later,” Codd said.

The transition to a new coaching staff, Codd said, should be a smooth experience based on his knowledge and the skills of the rest of the coaching staff.

Codd's winning ways have filtered down to the minor level. This past season he coached his Novice team to a Provincial championship going undefeated in 39 games.

“Probably the biggest thing I preach (as a coach) is effort – at every level. That's always been a staple of my philosophy and my belief. There's some other things like being accountable to yourself and your teammates. All those type of things, they don't change much, it's all just a matter of how you package them up as part of your coaching.”