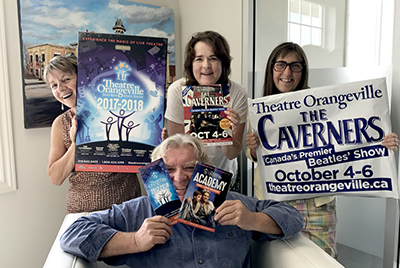 The Caverners Beatles Tribute Band is returning to Theatre Orangeville next week from October 4 to 6, for four performances.

“They're back by popular demand and why wouldn't they be?” said Artistic Director, David Nairn.  “They're the season opener: the best music in 60 years with the best Beatles' Tribute band in North America.”

We were doing a telephone interview while he was travelling to Toronto for auditions.

He commented that he has also been doing the auditions for the upcoming Christmas show this year in Orangeville: “It never fails in the auditions with the kids. They have to come and sing a song and there's always a Beatles song. The Beatles have a crossover audience. Every new generation loves them.”

“Of course, next, the youth programs are all under way,” he remarked.

An important part of Theatre Orangeville's overall planning are those youth programs the theatre sponsors: Theatre Orangeville Youth Singers (TOYS), a longstanding children's choir, plus a variety of theatre arts after-school programs offered to a range of ages. Sharyn Ayliffe, programs manager, says there are still spaces available in those programs. Inquiries can be made online at the theatre website.

As well, in partnership with Community Living Dufferin (CLD), there is the Theatre Orangeville for Exceptional Players, a program for special-needs children aged 11 to 17. The adult clients of CLD join the Creative Partners On Stage to put together, with the professionals at the theatre, two amazing shows per year.

Mr. Nairn went on to talk about the five plays lined up for the 2017-18 Season, beginning in mid-October.

Up first is Sugar Road by Kristen Da Silva. This lady has been praised as the next Norm Foster – by Norm Foster!

Here is the set-up: 12 years ago there was a night of passion between Hannah and Country Music star, Jesse, who is coming back to town for the Spurs and Hearts Music Festival. Imagine all the excitement at his return, but is Hannah ready for it?

Ms. Da Silva had a successful business career but she decided to make the transition to her real passion – writing plays. Sugar Road was produced by amateur theatres and is now ready to be presented by Theatre Orangeville as a professional World Premiere. It runs from October 19 to November 5.

The annual Christmas extravaganza is next at the theatre, opening December 1st and playing until the 23rd. This year, Dufferin's favourite gentleman farmer and playwright, Dan Needles, brings us another World Premiere.

This Christmas play is a musical, with music and lyrics written and composed by Clive Vanderburgh.

Telling us about the roles for the two children in the play, Mr. Nairn remarked: “These are really great parts for children. They are the driving force of the play.”

It seems that these two youngsters rescue a turkey which, so it turns out, is meant to be the “guest of honour” at the local church Christmas dinner.

“Casting children for any play is a challenge,” Mr. Nairn once admitted. “There are so many brilliant youngsters in this area. It's fantastic but hard to decide how to chose amongst them.”

The following production, Trudeau Stories by Brooke Johnson, opening February 15, and on until March 4, is not about politics – so, take the day off.

Mr. Nairn related: “It's really interesting to bring this play to Tory Blue Dufferin County. However, the story is about Pierre. While it is not in any way political, it is remarkable.

“It's a one-woman show with no intermission, about herself and Pierre meeting at the National Theatre School in Montreal and developing a dear friendship. They were very different people but this was not romantic. He would call her whenever he came to Toronto, where she was living. She spoke to him a few days before his death. This story is about the person, not the politician.”

Screwball Comedy by Norm Foster is the fourth in Theatre Orangeville's season. Mr. Foster takes us back several decades to the clever back-and-forthing style of the late 1930's movies: the quick quips between male and female counterparts in any given situation. His situation offer is that of a young female journalist, Mary Hayes, who is determined to make her way in a male-dominated profession. She butts heads with and infringes on the territory of famous journalist Jeff Kincaid, with very funny consequences.

“Its reminiscent of the RKO productions,” Mr. Nairn commented. “Stephen Sparks is with us for this one with a great cast of favourites.”

Notwithstanding the comedy, Mr. Foster will certainly leave us with food for thought.

Mark Crawford is back with another play to make us laugh out loud, The Birds and the Bees.

“Mark Crawford loves the rural setting, writing about who we think we are. This is a lovely play by one of the most exciting, engaging young playwrights out there.”

Briefly, when country neighbours are each dumped by their respective spouses, they approach their problems differently: Gail turns from love to beekeeping. Earl thinks he can start anew. Add the return to home of Gail's daughter and a young man worrying about the local bee population – we can relax and enjoy the fun.

“This play will be directed by Jane Spence,” Mr. Nairn happily informed us. “Theatre is still very male-dominated. Being able to provide more opportunities for women matters. We need to see more stories about women and written by women. We at Theatre Orangeville are dedicated to moving forward with that kind of direction.”

He said: “I'm really jazzed about that.”

For tickets or subscriptions for all five or three plays, contact the theatre's Box Office at 87 Broadway or the Visitors' Information Centre on Buena Vista Drive at Highway10; call 519-942-3423 or online at www.theatreorangevile.ca