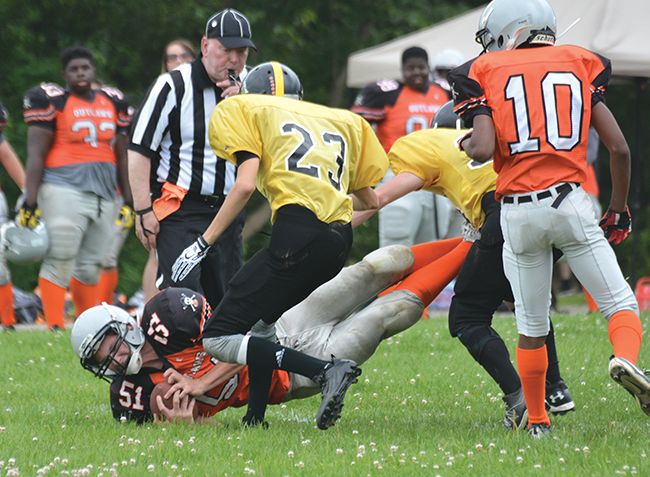 The Orangeville Outlaws Junior Varsity team are now done for the season after taking a 38-6 loss to the TNT Express on Sunday, July 23, at Westside Secondary School.

The Express was first to get on the scoreboard kicking a field goal early in the first quarter, then picking up a fumble for possession and dropping the ball on the one yard line.

They scored on the next play.

“We got off to a rough start but then we started changing up the plays and it started to work for us,” said Orangeville tight end, Nolan Jackson. “We picked it up a bit. The second half was a lot better. We played our hardest towards the end.”

The Express went ahead by 24 in the second quarter on a couple of well executed plays.

The Outlaws had success late in the half starting with a nice long pass from QB Nathan Falconi to receiver Nolan Jackson, but they couldn't go any farther and the Express took possession.

Holding a strong line at mid field the Outlaws worked hard including a solid hit from James Stapleton who broke through the line and sacked an Express player for loss of yards.

The second half got started with a TNT pass interception that was returned for a touchdown that left the Outlaws trailing 30-0.

the O-ville defence to give them possession on the 20 yard line and a running play that took them to the one yard line with 5:30 left on the clock.

Jordan Payne scored the only Outlaws touchdown on the next play when he made a dive over the Express line to score.

The game ended with a 38-6 win for the Express and it also ended the Outlaws' season as they couldn't make a berth for the OPFL playoffs.

The top four teams in the standings – Clarington, TNT Express, Toronto, and Niagara, will now go on to play semi final games leading to the championship final.