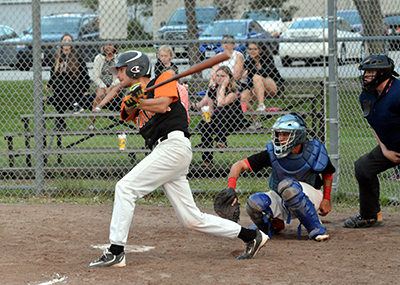 The Giants travelled to Tottenham on Friday, July 21, to take on the Newmarket Cornhuskers in a game that resulted in a blow-out and win number 14 for the O-ville squad.

The Giants got the bats moving early in the game with four runs scored in the first inning.

Darius Barlas started things off with a hit to right field to bring in the opening run.

A play at second base on a steal bought enough time to allow Barlas to score with a sprint to home plate.

Nathan Drury hit a drive past shortstop to bring in a run and the Giants were up by four when a batter was walked with the bases loaded.

The second inning saw the Giants take a 9-0 lead on opening hits from Matt Drury with bases loaded and Nathan Drury who hit a scorcher down the third base line.

After bringing in a run on a walk, two more runs were recorded to end the inning.

A third inning hit to right field from Josh Hickey placed men on first and third. Drew Huerter stepped up and hit for a single to bring in another Giants run.

Another run was recorded when a batter was beaned at the plate with bases loaded to walk in run.

The Giants were up by 14 on hits from David Humphrey and Kevin Buck.

The scoring was capped at 18 when Drew Huerter hit a grand slam over the left field fence.

The Cornhuskers got on the scoreboard in the fifth inning when a player managed to put one out of the park with three men on base to make it an 18-4 game.

The New Lowell Knights are in first place in the League followed by the Bolton Brewers, Clearview Orioles, and the Aurora Jays.

The Giants will play their final three games on the road before heading into the playoffs.