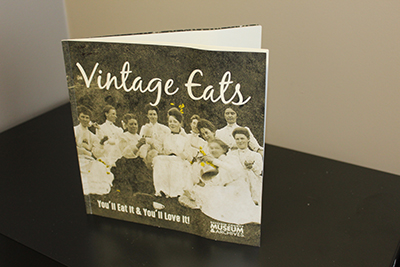 The Dufferin County Museum & Archives (DCMA) is aiming to take local residents on a mouth-watering tour through time with the release of a ‘new' cookbook.

Aptly named Vintage Eats, the 36-page book gathers over 100 years' worth of tasty treats that have withstood the test of time. The second of what will be at least a three-part project, the cookbook provides local residents with the unique opportunity to try out dozens of grandma's secret old recipes in one convenient location.

“This cookbook is really unique in the sense that it isn't really like any other cookbook that's out there,” said Vanessa Lio, the Archives Assistant who spent six months researching and compiling all the old recipes together. “This focuses on the old, tried and tested recipes that were handed down generation to generation and, eventually, found their way to the museum and archives.

“There are some incredible recipes included – we have appetizers, soups, main courses and desserts. Hopefully, there's something that appeals to everyone.”

Having had the opportunity to cook up and try out most of the recipes herself, Ms. Lio highly recommends the chicken croquettes recipe on Page 7 of the book, while the maple walnut cream pudding featured on Page 26 will surely appeal to those in the community with a bit of a sweet tooth.

Vintage Eats follows on from DCMA's dessert recipe booklet, which it released to the public last year. A third edition, focusing on both alcoholic and non-alcoholic beverages is in the works, with Ms. Lio hoping to get that published some time in 2018. While there is much to look forward to, there's more than enough in Vintage Eats to keep people busy for the foreseeable future, with 35 different recipes featured throughout the book. So far, the book has only been released to DCMA members and, fortunately for us, members of the media. Vanessa said she expects the book will eventually go on sale in the DCMA gift shop.

Even still, she says, with only a fraction of the population having had the opportunity to check out Vintage Eats the feedback thus far has been fantastic, making all those months of hard work instantly worth it.

“We've had fantastic results so far, the comments have all been really, really nice,” Ms. Lio said. “That's why we decided to move forward with Vintage Eats, because of how well received our first edition was. This is just a continuation of that first release, except this time we showcase pretty much every food group and course there is.”

She added, “And, while the recipes are obviously the main feature, we've also included a number of interesting photos from our collection. I've been telling people it's kind of like a hand-held mini exhibit people get to walk away with. We're all really, really proud of how Vintage turned out.”

The release of the book ties in nicely to DCMA's Food and Facades tour, which it has been running in downtown Orangeville over the summer. Hosted by DCMA activist Laura Camilleri and museum Curator Sarah Robinson, the tour takes locals on a stroll down Broadway, all while sampling some of our local restaurant's finest cuisine. There are two final tours pencilled in for 2017, at 2 p.m. and 4 p.m. on August 12. Cost of a ticket is $20. You can book a spot by calling 877-941-7787.

With work ongoing for the future publication highlighting all the historic beverages of Dufferin County, Ms. Lio is on the lookout for members of the public who may be willing to test out some of the recipes in DCMA's collection. Anyone with an interest in coming forward as a tester can contact Vanessa at info@dufferinmuseum.com.