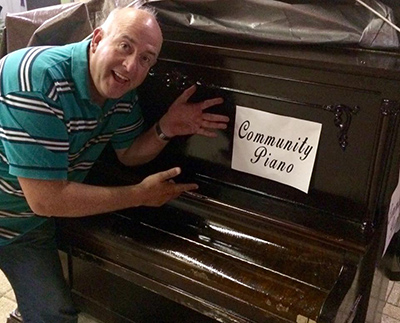 A curious case of Town staff versus Council has been played down by Orangeville's mayor as just a “simple misunderstanding”  after bylaw officers again demanded removal of the new community piano on Broadway.

The confusion began at council on July 17 when the five members in attendance seemingly ignored two separate motions, one in favour of keeping the piano in its current location in front of The Altered Native and another calling for it to be removed. Neither motion received a seconder.

Many believed the issue had been put to bed on June 26 when council sided with the property owner, Shayne MacDonald, who felt he was doing a good thing for the community by putting a working piano out in front of his tattoo shop. “Lots of people seem to like the piano, I see people out playing it all the time,” Mr. MacDonald told the Citizen. “Orangeville is a very artistic town, so it's cool to be able to provide a place for some of these people to express themselves.”

During that June meeting, Council instructed staff to strike down a previous removal notice handed out by a local bylaw officer, essentially serving what Mayor Jeremy Williams described as a “hands off” warning.

Town Clerk Susan Greatrix said that lack of a signed indemnity agreement, a document that transfers all risk from the Town to Mr. MacDonald, was the reason Council did not sign off on the piano staying on July 17. Ms. Greatrix also serves as head of the Town's bylaw department. In the days following that meeting, Mr. MacDonald received yet another compliance notice once again demanding the piano be removed.

“I don't know how or why (that second notice) happened. I was very disappointed to hear about it,” Mayor Williams told the Citizen. “As far as I'm concerned, Council has weighed in on this issue already, we have made a motion to provide direction on this issue. In my mind it's crystal-clear that Council has said, ‘leave this issue alone. Don't touch the piano.' Or at least not until council decides to pass another motion.”

Mayor Williams said he has submitted a letter to Ms. Greatrix asking that staff follow the direction Council has given them. In a release to media on Wednesday (July 26) Town staff asserted that its bylaw officers were simply following the letter of the law in issuing the two compliance notices.

“Initially placed without any official permission, the piano contravened municipal bylaws. Seeking permission to occupy or place items on public property is commonplace,” the release stated.

“At its July 17 meeting, Council was informed that the insurance information had been provided by no indemnity agreement was provided… The Town's solicitor has confirmed that since the required documents were not provided to Council, the piano was not permitted to remain,” it continued.

“Bylaw enforcement officers acted as directed by Council, the Chief Administrative Officer and the Clerk/Director of Bylaw and requested that the piano be removed from the public right-of-way,” the release concluded.

Ms. Greatrix confirmed the municipality had, albeit belatedly, been provided with an indemnity agreement. As such, the removal notice, which gave Mr. MacDonald until Friday (July 28) to get rid of the piano, has been waived. Now that all the necessary documents have been provided, staff will once again bring the issue before council at its next meeting on August 21 for what will, hopefully, be a final decision.

“My position hasn't changed at all,” Mayor Williams said. “I think the piano is a great thing for the community. If I were able to change anything about the piano, it would be that I could play it a little better!”