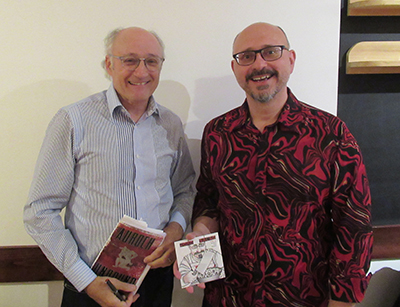 The event took place Monday (July 24) at Pia's on Broadway to unveil Mr. Posner's fourth novel “Auroch Unbound” and Mr. Sitoski's CD “Word Salad.” The event saw various residents come by to enjoy some food, drinks, interact with the two poets, get their autographs, as well as hearing Mr. Posner read some passages from the book, and to hear some of Mr. Sitoski's CD.

He is currently Dufferin County's first Poet Laureate, which he says is going well and is working on pieces that reflect the community. “Whether it's the farmers' market, immigrant's, there is a lot to write about.” He says he is currently organizing events for poets and visual artists, and down the road, will be speaking to the various schools in the fall, mentoring at the Orangeville Library, and doing poetry workshops.

Mr. Sitoski, from Owen Sound, explained he has known Mr. Posner for several years after hearing him speak in his county. They decided to do a joint unveiling of their work in town, bringing different styles of poetry together, “to celebrate two things rather than one,” Mr. Posner put it.

Mr. Posner's described “Auroch Unbound” as a take on the myth of Theseus and the Minotaur, but “updated and twisted around a bit.” He says he likes to make every novel different, “often in style, in voice, in subject matter. I try not to repeat myself, I like to take chances.”

Mr. Sitoski says for himself, spoken word is immediate. “To get involved with something that's a little more direct.” He explained his CD doesn't have a theme to it, just various pieces, some recent, others he's been working on for several years, that flow well together, as spoken word “works well without a visual element… the words have to carry absolutely everything.”

He says some of his influences include Leonard Cohen, C.R. Avery, and Buddy Wakefield.

Mr. Posner says through these unveilings, he wants people to enjoy them, be inspired, and the younger generation to carry on the writing. “Language is something that can die out if it's taken for granted, or misused.”

He used texting and the Internet as examples of that misuse. He says the technology makes it easier to get the word out quicker, but the way the word is interpreted can be the problem. “There's a balance to be struggled there.” Despite this, he says he doesn't believe poetry will die out, but will keep going by constantly evolving.

Asked what he loves about poetry, Mr. Posner says it is the one art form that points at “the essential of our existence in the most efficient, poignant, powerful way.”

Mr. Sitoski agrees it's important for these unveilings and get together, and explained that poet groups and these scenes are generally small, and follow a D.I.Y style. He says the bigger awards for artwork are just one aspect. “It's got to come from somewhere, it's got to come from the ground up.”

He says the real action comes from “people in cafes and bars passing around photocopied, stapled, handwritten things; getting together in coffee shops, trading notes, comparing what they've done, practicing in their bedroom.” He added quality is better in smaller groups than the larger scenes.