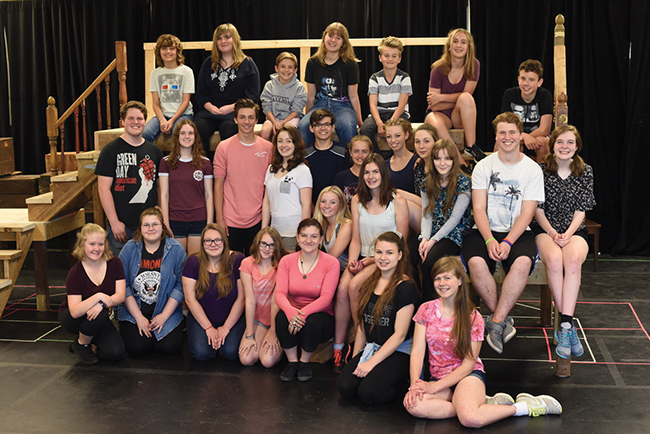 Doing an interview with the cast of Young Company is just the best – the openness, humour, freshness – simply wonderful. Here is the proof.

“[We do] an exercise to build up focus and trust ,” we were told, “breathe together just as we are on stage, taking our time; humans love patterns.”

“You're working with other people – [it's important to] get in tune, each with each.”

This builds up awareness, one of the other on stage, so that, even out of sight, that presence is felt for the flow of the action.

The work in rehearsal is, in part, “getting inside each others' heads,”  said Pam Demetriou, Director of the musical.

Quite remarkable but necessary for successful delivery of a live show on stage.

“I think you need to trust like this, especially with the stage fighting,. There's fighting with guns and knives,” one of the actors said.

We talked about the show, Les Miserables: the timing, its tragedies – its darkness and, eventually, its light: Paris, beginning post-French Revolution, 1815, and over several years.

The plot begins with the escaped prisoner, Jean Valjean.  He is hunted and hounded by the policeman, Javert, who is dedicated to capturing him.

The tragic background upon which the story builds up from Jean Valjean's flight and reinvention of himself and the interweaving of villainy and heroism of the many characters. The climax of the musical takes place during the students'  uprising and the building and defence of their barricade.

“Everyone dies!” our young thespians declared, saying, variously, “The blood of the martyrs  is the water that makes the meadow grow..”

“Every ending comes with a new beginning-”

“The theatre is the one place where a person can cry and nobody minds..”

For such a huge show, most of the cast play several roles: lots of the young ladies perform male roles as well. This requires a shift in attitude, movement and voice.

“They have to sing an octave lower,” Joy Bell, Music Director, told us.

The girls are enjoying the challenge – the male parts have to be played as strong men. When we inquired and the numbers were added: there are 107 roles in Les Miserables!

All but two of this cast have performed in other theatrical production. The two are twins, in for the first time and loving it. Most of the cast have worked with Theatre Orangeville before.

They talked about acting with this group, tragedy at all and Les Mis in particular – throwing the observations out in turn, creating a symphony of commentary.

“It's great for people to get into someone else's head – that's what happens with Les Mis.”

“I've never been able to do the things I do in this play – you really turn into another person.”

“It's very powerful – something different to everybody.”

“We love the idea of tragedy because it makes people feel something.”

“Les Mis means so much to so many people – they respect it.”

“With live theatre, anything can happen – it's exciting to watch how the actors power through – every show is its own show – there's only one shot at that show.”

They talked about each other:

“Being in this cast,” one of the girls shared, “has changed my life. I've never connected with a huge group of people – when I'm done with this, I know I have you guys.”

Said another: “Being in the theatre with a group like this – it's a place where you can feel safe.”

David Nairn brought the magic quality of this production into focus: “We have been trying to buy the licence to do this show for five years. If we had secured it a year before or after, it would have been a different show. [The timing] resulted with this creative conclusion of how this fabulous cast is here.

“Being a teenager is not easy. To come together with your deepest  and darkest – and to trust that will not come at you. It's fantastic.”