Outlaws’ Bantams get ready for playoffs 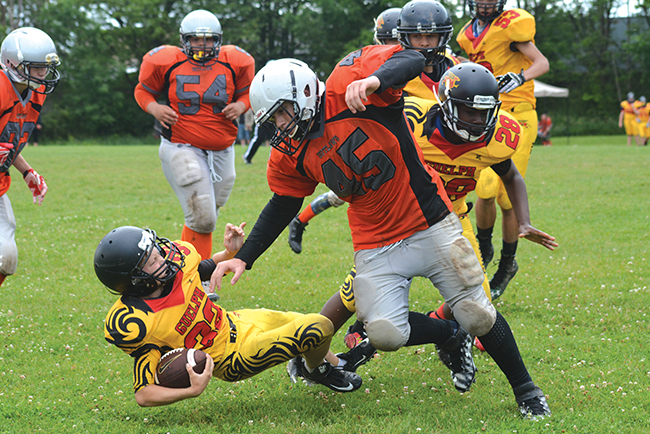 The Orangeville Outlaws Bantam team put in a good effort during Sunday's (July 16) game against the Guelph Gryphons but they couldn't overcome a 14 point deficit when the Gryphons got the edge in the second quarter.

Orangeville's Aidan Murray opened the scoring on a TD in the fist quarter.

The Guelph team responded and in the second quarter they were leading 22-8.

The Outlaws closed the gap late in the quarter after taking possession on downs deep in their own end. Murray got his second touchdown of the game with an 80 yard run down the sidelines to score.

The Gryphons matched it with a TD with just over one minute remaining in the half.

Returning for the second half, the O-ville team kicked to start the action.

The Guelph attempts to get out of their zone were held up when Joshua Yumul knocked own a pass attempt followed by a slam from Nicholas Orr to knock a Gyphons ball carrier across the sidelines.

The Guelph team managed to score a running play to put 40 on the scoreboard.

The fourth quarter saw the Outlaws go to the throwing game.

Starting at the 40 yard line, quarterback Shamsher Hundal threw a long pass to Jacob Hosford who sprinted for 20 yards to score and the Outlaws were back in the game with 28 on the scoreboard.

“It was tough. We started off slow. We just need to tackle more and get our hands around them,” said Orangeville quarterback, Shamsher Hundal. “After

that we had some successful tackles and I think we played good. I felt confident. I felt like my arm was ready to start throwing these long bombs,” Hundal said of the success of his pass attempts late in the game.

The Outlaws line put up a solid defence late in the game keeping the Gryphons pinned at mid field with good work by Devan Bogart, Tyler Simpson, and Joshua Yumul on the line.

Late in the game the O-vill team found themselves in trouble with Guelph pushing hard deep in the Outlaws end.

A procedure call dropped the ball at the ten-yard line. The Gryphons made it to the one-yard line on the next play then went through the middle to score.

The Outlaws finished off the day with another long completed pass from Hundal to Hosford for the final TD of the game.

After Sunday's game the Outlaws have a 4-5 record for the season.

They will have a bye this weekend and now get ready for the first game of the OPFL Bantam Regional Rep playoffs.