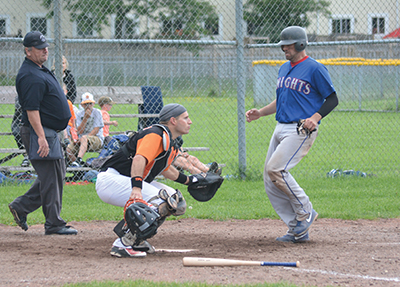 The Orangeville Giants have dropped to fifth place in the North Dufferin Baseball League senior standings after going into a bit of a mid season slump.

The squad was in first place after a successful early season that saw them lose only one of their fist 15 games.

The streak ground to a halt beginning with a loss on June 29, and followed with another five losses in a row.

Sunday's (July 16) game against the New Lowell Knights saw a lot of hitting and a lot of good defensive play from both sides.

The Knights opened the scoring on Sunday with a single run in the first inning.

O-ville's Josh Hickey led off with a single in the second followed up with a hit from Nick Hodgson to put two men on base but the side retired with no runs.

The game was stuck at 1-0 for the first four innings.

The fourth inning ended on a line drive directly at New Lowell pitcher Brandon Norrie who snagged the ball at head level to end the frame.

The Knights took a two run lead in the fifth when an Orangeville error bought enough time for a New Lowell runner to cross the plate.

The Giants got on the scoreboard in the fifth inning when Shaun Sahadeo hit a drive past second base to put men on first and second and a follow hit and an errant throw allowed the O-ville squad to score.

The Giants flied out on three consecutive hits in the sixth to end the inning and give them one more at-bat to see if they could get back in the game.

The Knights scored a single run in the seventh inning on a big hit to the centre field fence that drove in a run.

The Giants were in scoring position in the final inning when Darius Barlas hit to centre and loaded the bases but the next hit popped up high and short and the game ended with a 3-1 win for the Knights.

The New Lowell Knights are currently in first place in the League with an 18-3-1 record.

They are followed by the The Bolton Brewers in second place with a 16-3-1 record and the Clearview Orioles in third spot with a 16-5-1 record so far.

The Aurora Jays slot in with a 15-6 record followed by the Giants who have 13 wins behind them with five games left on the regular season schedule.

The Giants have five more games on the scheduled including two that were rescheduled from earlier rain-out games.

They will be in Tottenham this Friday, July 21, to take on the Newmarket Cornhuskers in a game rescheduled from earlier in the season. Game time is 7:00 p.m.