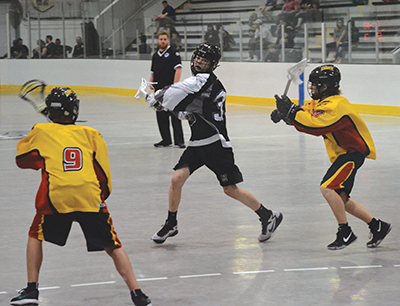 Orangeville was invaded by over 800 lacrosse players, coaches, and bench staff plus their families during the 19th annual Barry Burman Summer Shootout that ran from Friday, June 23 to Sunday, June 25.

Games were played at both the Alder Street arena and Tony Rose Memorial Sports Centre.

Midget, Bantam, Peewee, Novice, and Tyke teams were represented with the Orangeville Northmen entering teams in all five divisions.

Squads from around the region and beyond came to O-ville for the tournament that got underway on Friday night.

The tournament is named after one of the Orangeville Northmen Minor Lacrosse Association's founding fathers – Barry Burman.

Burman first became involved in Orangeville lacrosse in 1975 as a coach of the Orangeville Stinges and remained active in lacrosse for many years as a player, coach, volunteer, and executive member.

Orangeville teams did well in the tournament taking gold in two divisions and bronze in one division.

The Northmen Novice team won gold with a 14-3 win over Peterborough in the final game.

The Northmen Bantams won gold winning 7-3 over Oakville in the final game of their division. Special guess team this year, the Cali Lax All-Stars from California met up with the Northmen Midgets for a battle for the bronze on Sunday afternoon.

A standing room only crowd turned up at Tony Rose for the game. The Northmen left the floor with a 9-5 win to take the bronze medal.

Plans are already underway for next year when the Northmen will host the 20th annual event which also coincides with the Northmen's 40th anniversary.