Summer brings TO’s Young Company back to the stage 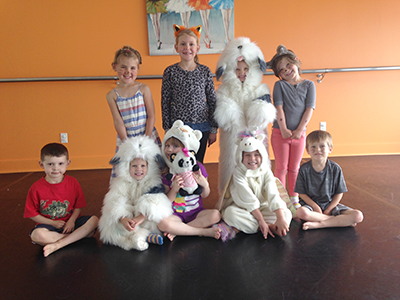 To every intent and purpose, the productions performed by Theatre Orangeville's Young Company during the summer season are professionally produced.

The difference is that the actors are students of the theatre while they are engaged with the company for the month of July or August or both. One month is given over to preparing and rehearsing for each of the shows: a musical and a drama: this year, on stage – Les Miserables and Peter Pan.

There's such excitement for the cast to be performing Les Mis in July. The last time Young Company did this show was 2003. Artistic Director David Nairn has been wanting to bring it back for some time.

Said Sharyn Ayliffe, the theatre's Programs Manager, “It [Les Mis] has been on the academy's radar for about three years but the rights have been tied up for a long time  – they were not releasing the rights until recently. I was watching it [closely] and as soon as it was possible, we went after it.”

With Les Mis, the royalties are based on a number of factors, including what company is doing the show, whether educational or professional, lay the costs involved.

“They have some magical formula,” Ms. Ayliffe remarked. “We have to rent the script – it's a big show – 28 cast members – [this and the 2003 version are] the biggest Young Company has run.”

The creative team for Les Mis is the largest too.

As Ms. Ayliffe put it, “Lots of cooks in the kitchen – the kids are really lucky to have such a talented professional production team for this.”

Theatre Orangeville's Production Manager, Beckie Morris, is the designer for the show and, with such a team, the set will no doubt blow us all away. As Ms. Morris was not with the theatre in 2003, this will be a whole new show.

In the leadership roles for the performers are  Pam Demetriou as Director, with Dan Reale as Assistant Director; Joy Bell is Music Director.  Vocal Director is Mark DuBois, who also worked with the 2003 production. New to the scene is Nicolas Mustapha to play the piano as accompanist for the performances.

The month of August is given over to preparing and performing Peter Pan. Big news for this show – it will be the first Young Company production on the new stage on Island Lake.

Primarily, this presents some really interesting challenges to Beckie Morris – will she make Peter Pan fly? The answer is very likely “yes” but we will all have to go and see how – or rather, see that she has managed and wonder how.

Dan Reale will have his first chance to take the reins as Director for this show and David Nairn, his long-time mentor, will back him as Assistant Director.

Still a fairly large cast at 21 members, the special aspects of the story – Peter Pan himself and Hook – with the stage fighting and the flying on the Island Lake, the creative and performing teams have their work cut out for them.

Ms. Ayliffe said of the stage there, “The dome over the stage is structural so there are opportunities available – there is the possibility of ‘using air'.”

She added: “We want everybody to come.”

For many reasons, primary of which is to have fun, the youngsters of the community are welcomed to have their time in the theatre arts too. There are two one-week camps for the children.

The first of these, open to young people ages four to six, set for July 10 to 14, offering half and full days (with before and after care) is called “Bippidy – Boppidy ...Where are we?” This is a week of imaginary travel with a different theme every day, using magic wands, wonderful stories, dramatic play and games, crafts, dress -up and lots more.

The second week, designed for youngsters ages seven to ten years, is an all-day camp, with before and after care available. It is titled, “If Kids Ruled the World.” Just imagine!

The possibilities are “endless,” in a week of exploring how things would be if kids “were in charge.” Let their imaginations find inspiration from various stories and watch the ideas that come.

The camp builds on drama skills through activities, skits and games. At the end of this week, they put on a fun presentation for the parents.

Jane Lanktree, as director of the camps, has been running these programs for years and is wonderful with the children. She is assisted by several youth leaders to keep the ratio small.

For information about tickets to the shows of Young Company and to inquire about the camps, contact the theatre on line www.theatreorangeville.ca/youthprograms.