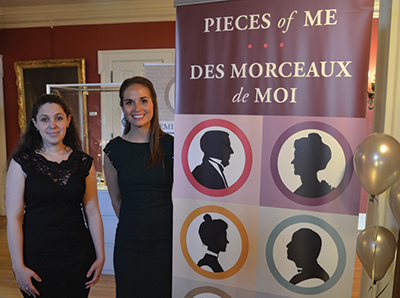 An Orangeville resident is one of just 40 scholars from across the globe to be accepted into the University of Oxford's prestigious DPhil in History program this year, but she needs a helping hand from her community to get there.

Jasmine Proteau has come a long way since her days roaming the halls of Banting Memorial High School in Alliston. Always considered something of a budding student in her youth, Ms. Proteau, 25, has so far completed three different university degrees on her quest to become a museum curator. Now, she hopes to expand her horizons even further as she bids to complete her studies overseas.

Sitting down with the Citizen last week, Jasmine shared details of her incredible educational experience to date before revealing why she was so set on studying at one of the world's most illustrious institutions.

“I started out, like most, a simple girl just trying to adapt and make her way through high school,” Ms. Proteau said. “I was always fascinated by history as a child and so when I started thinking about what I wanted to do in life and what potential areas I'd like to study post-secondary, history seemed a natural choice.”

And so, with the full backing of her family, including her single mom and younger sister Whitney, who has Down Syndrome, Jasmine packed her bags and in 2009 relocated to Guelph, where she hoped to reconnect with her cultural roots by completing a joint major in both History and French (2013). Her Masters of History from the University of Ottawa soon followed (2015), before Jasmine pushed her education one step further with the completion of a Masters in Museum Studies at the University of Toronto (2017).

“It's been an incredible journey so far,” Ms. Proteau said. “My goal initially was to become a university professor. I really, really wanted that. At the end of my first Master's degree though, I had to sit down and consider whether or not it was going to be possible.”

She added, “It's very hard to secure a professorship. It would have been such a struggle for something that might not ever happen, so I started to consider other possibilities.”

During her time in Ottawa, Jasmine spent five months as a parliamentary assistant to former Canadian Heritage and Official Languages Minister Shelly Glover. It's a position she credits with helping her transition towards her new career path. After securing a place at the University of Toronto, Jasmine started looking to the future – considering potential areas in which to focus her work.

In what was her final project at U of T, Jasmine joined with another student to create ‘Pieces of Me', a Brockville-based exhibition that sheds some light on the lives of six area residents – three who were considered upper-class and three in the working class – living in early 20th century Canada. It was officially opened to the public on April 27th at Fulford Place in Brockville.

“It was a really cool opportunity getting to actually sink my teeth into an actual museum exhibition, it just sort of fueled my fire to push on and make sure I have the opportunity to work on more in the future. It reassured me I'd made the right decision,” Ms. Proteau said.

And that sentiment of ‘making the right decision' has floated around Jasmine's head for months now after she set her heart on securing her PhD in England. While she's convinced she's doing the right thing in pursuing this “once-in-a-lifetime opportunity”, it is going to come at a cost. And an expensive one at that.

Ms. Proteau needs to have $31,000 by July 31 to officially secure her spot at Oxford. So far, she estimates she has less than half that amount. In total, she calculates it will cost in the region of $150,000 to complete her DPhil – Oxford's term for a PhD.

Indeed, pursuing one of the highest forms of education at the world's leading school in your field (alongside the University of Cambridge) does not come cheap. For Jasmine though, it's about more than simply adding a fancy name and title to her resume.

“Here in Canada, it takes six years to get your PhD. In England, it only takes three years. Coming in at half the time, it's extremely appealing for someone so eager to launch a career in the museum industry,” Ms. Proteau said. “Add to that the fact that my specific area of focus just so happens to focus on English and European interactions and the decision starts to make sense. A lot of the sources I'm going to need for my work will be readily available to me over in the UK. That's a big, big benefit.”

Currently holding down two jobs and awaiting a response from a number of different scholarships and bank loans that she has applied for, Jasmine is desperate to find the money that will essentially send her to Europe. She has set up a Go Fund Me page, which currently has racked up $920, and plans to hold several fundraisers throughout the community over the coming month.

“Nobody ever likes asking for things, but this is just one of those moments where I know if I don't try, if I don't give it everything I've got, I will kick myself for the rest of my life,” Jasmine said. “This is a once in a lifetime opportunity.

It would mean the world to me to be able to get over to England and broaden my horizons even further. It's such a huge honour to be offered a position in such a competitive program… It would be a completely life-changing experience.”

Jasmine hopes to channel her studies on the travel of 19th century women in Europe with a specific focus on old guide books. More than anything though, she aspires to challenge herself on the biggest stage and set an example to the next generation that, with a little bit of hard work, absolutely anything is possible.

“One of the things I have come to discover over the years is that the more I learn, the more I learn I don't know. No matter how educated you are, what you know is only a fraction of what's actually out there and to learn more you have to be willing to push yourself,” Mr. Proteau said. “This is a big deal for me. I've worked so hard throughout my life, to be on the cusp of realizing my dream and pursuing my PhD… It's special. I really hope I have the opportunity to do it.”

To learn more about Jasmine's story, email her at proteaujasmine@gmail.com. To help fund her “dream” of studying at Oxford, visit gofundme.com/JasmineProteau.