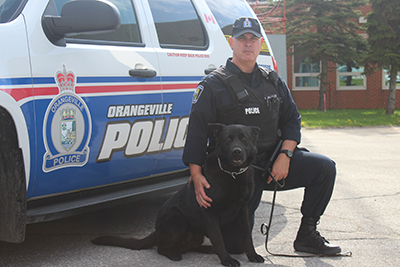 While many area residents are still bickering back and forth over the future of policing in the community, the Orangeville Police Service is celebrating something of a milestone this year with the 10th anniversary of its canine team.

Since the team's formation in 2006/07, the OPS has seen two canines serve as its member. Led by Constable Tom Dellelce, the animals have been described as “low-tech tools that yield high-end results,” with the team having been involved in over 200 investigations since its inception.

The OPS' first canine, Ares, was involved in the majority of those investigations until his passing in late 2015. Now, Cst. Dellelce is flanked by Radar, a two-year-old German Shepherd from Slovakia. Since his introduction to the force last September, Radar has been used in between 10 and 12 investigations.

Cst. Dellelce told the Citizen the canine team will typically carry out “one or two” investigations every six weeks.

While he is the lone human member of the OPS canine team, Cst. Dellelce noted he was classified as a calls-for-service officer first and foremost, with his duties on the canine team secondary to his primary duties as a beat cop.

“If I were to explain it, it's the same as a normal patrol officer also maintaining a secondary duty as a breath technician. On shift, he's a regular patrol officer, but when an impaired individual comes into the station that officer then shifts hats and becomes the breath tech… It's the same idea for me – the canine team is here when it's needed,” Cst. Dellelce said.

Describing the types of calls the canine team will typically respond to, Cst. Dellelce said they would mostly be required for tracking purposes, calling Radar a “locating tool.” He noted the team could also be used to scour buildings and deter “bad guys” from going against police orders.

“Radar really is a force multiplier. By that I mean it could take three or four officers a significant amount of time to search a building… Radar can fairly quickly go through a building and decide whether it's secure or not secure,” Cst. Dellelce said. “We sometimes use him for his ability to apprehend a bad guy without putting officers potentially in harm's way.”

He added, “A police dog can significantly reduce risk and liability when involved in high-risk investigations or apprehensions. Radar is a force multiplier, he is a deterrent, he's an officer's safety tool… These dogs are just good animals, and I think the evidence of that is that it's not just our service that makes use of a canine team, but services in Peel, Durham, Ottawa, Toronto, Hamilton, Kitchener-Waterloo and Guelph do too.”

Cst. Dellelce noted that Orangeville's is “probably” the smallest community police force to have a canine team.

While he was quick to talk about the positives of a canine team, Cst. Dellelce admitted it was more of a support tool for responding officers carrying out an investigation.

Now a 10-year veteran of the OPS canine team, Cst. Dellelce struggled to put into words just how strong that bond becomes between man and his best friend, even in the line of duty.

“That bond between a man and a working dog just isn't the same as the bond you may have with a pet dog… It's really indescribable unless you're in that position, hearing that hat yourself,” Cst. Dellelce said. “I can't really put it into words. It's just different. I've had pet dogs, this is my second working dog… The bond is just different.”