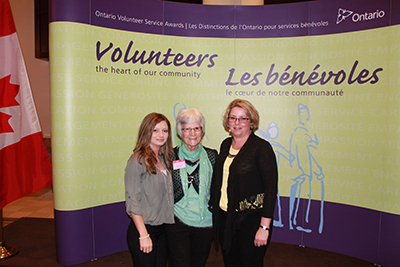 When she first stepped foot in the hallways of the Avalon Care Centre in 1995, Carol Zammit probably didn't realize just how important a place the local facility would come to hold down in her heart.

Located at the west end of Broadway in Orangeville, the Avalon is a fully accredited long-term care home that provides caregiver relief to up 135 permanent residents. For the past 22 years, Ms. Zammit has been offering her services to the facility on a volunteer basis, essentially becoming part of the furniture, a regular staple for the home's aging community to communicate with.

Spending much of her time as a ‘One-on-One' volunteer at the centre, Ms. Zammit estimates she has built “true, meaningful relationships” with at least 30 residents during her tenure while also lending a listening ear to dozens of others throughout the years. On April 19, Carol was recognized for her “impeccable” service over the years when the provincial government honoured her in making its annual Ontario Volunteer Service Awards.

Sitting down with the Citizen earlier this month, Carol, originally from the small, Mediterranean island of Malta, said she first got involved with the organization over two decades ago and just how large an impact volunteering at the facility has had on her life in the years since.

“I was going through a bit of a tough time right before I started volunteering with the Avalon. My mother had just passed away out in British Columbia… She was 82 years old and I thought I was prepared for it to happen, but when it did it really, really hurt,” Carol recalls. “And so, when I returned back home, my eldest son suggested I volunteer at a retirement facility to try and snap out of slump.”

Although she admitted she wasn't too keen on the idea at first, largely because she felt “a little uncomfortable” around older people, Carol decided to give it a try and got in touch with the powers that be at the Avalon.

“I remember telling the volunteer coordinator at the time that I didn't have any special talents, I've never done anything like this before in my life so wasn't experienced at all, but I was willing to try if they showed a little patience with me,” Ms. Zammit said. “Right away when I came in that first time after the meeting they said they had somebody in mind for me to connect with and we just went on from there.”

That first relationship Carol established with an elderly lady was one she still cherishes today. Carol spent three years visiting the resident before she fell ill and passed away in 1998.

“That one hurt… It brought all sorts of memories flooding back about my mother,” Carol said. “I'd grown to love this person as if she was my own mother. We really clicked. It got to the point where I couldn't wait for Wednesday to come around so that I could come in and visit her again. It was a very sad moment when I learned she had passed away.”

But, just as you do with most things in life, Carol learned from that first experience. As she met with more and more residents over the years, she realized the love she felt and received was worth the heartache when it was time for another resident to move on.

“It has been a pleasure, a privilege, but also very painful,” Carol said.

Robin Cudney, Coordinator of Volunteer Services at the Avalon Care Centre, lauded Ms. Zammit for her years of work, stating it was a special thing to see such a committed volunteer battle through personal setbacks to develop and cultivate relationships at the facility.

“It means the world to us to have such a fantastic group of volunteers who come out each and every week to help put a smile on the faces of all of those that call the Avalon home,” Ms. Cudney said. “Carol has put in an unbelievable amount of time over the years and she means the world to our residents. She's an absolute staple at the Avalon and we're extremely lucky to have her.”

Despite being declared legally blind by the Province several years ago and only maintaining the use of her left hand following a childhood accident that maimed her right arm and impaired her vision from her right eye, Carol has continued to visit and still to this day rolls through the doors of the Avalon at her usual time on a Wednesday afternoon.

“It is more beautiful and satisfying to give than to receive. I don't do this for the praise, I don't do this for anything other than to come out and see these wonderful people. It's been an absolute privilege,” Carol said. “I truly feel that I have received more than I have given in all my years here at the Avalon. The relationships you develop and knowledge you gain is unlike anything you could get anywhere else. I hope to keep visiting for years and years to come.”