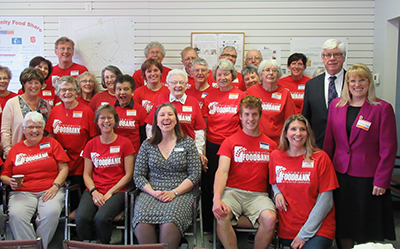 Orangeville food bank is celebrating 25 years of helping those in need, recognizing the many involved throughout its historic time of receiving, giving countless amounts of food, and volunteering.

Back in 1992, the world was certainly a different place. People were singing to “Smells like teen spirit,” while cell phones, the computer and the Internet were beginning to take shape.

For the food bank, it began with just four volunteers, but has grown now to over 70.  It currently serves roughly 500 individuals per month. According to the food bank's website, back when they first opened, “its main focus was emergency food relief for members of the community who were in need of assistance due to loss of income, personal injury or other crisis.”

From noon to 2:00 p.m. on Wednesday (May 24), members of the food bank, volunteers, local dignitaries and others, helped celebrate the continuous support the food bank has done for Orangeville.

Heather Hayes, the food bank's executive director, gave a heartfelt speech to all those who attended, were unable to attend, and those no longer with the food bank. “Today we still have neighbors helping neighbors care for the community.”

She described the volunteers as the “heart, the soul, and the hands” of the food bank. “Without them, we would not be able to do what we do,” whether filling shelves, helping on the weekend, or doing food drives.

She mentioned to everyone who helps out in some capacity for the food bank, including those who just donate, “Without any of you guys, none of this would be possible.”

Dufferin-Caledon MP David Tilson spoke, and gave a certificate to Ms. Hayes. He mentioned he also gave a statement on the food bank's 25th anniversary in the House of Commons, and all their accomplishments, which “received a standing ovation.”

Mr. Tilson commented on how it's unfortunate there's people in need, but good how the food bank has been able to continuously help. “It's not just celebrating 25 years of existence, we're also here to thank you all for all the great work you're doing for our community.”

He said last time he was here was five years ago for the 20th anniversary, and noticed several changes. Just in the past year the food bank has made major innovative changes, including a new shopping model that allows its users to shop like they're in a grocery store, as well as the addition of a walk in fridge and freezer, enabling them to have fresh produce, and a new partnership program called “Grow a Row Give a Row,” to help donations of fresh produce increase.

Nancy Rampley, one of two of the four founders still working with the food bank, was honored for her work. She recalled how they “started with nothing, we didn't have a lot of money,” but noticed there have been lots of changes throughout her time.

She says it's a great accomplishment and stays because there has always “been a need, and the need is always growing, so as long as there's a position here I'll keep volunteering.”

Ms. Hayes mentioned that although they hear challenging stories, they see lots of random acts of kindness, such as the “broccoli lady,” “captain crunch lady,” a woman who donates feminine hygiene products, and recently, a man who donated 300 pounds of fresh food and six large cases of diapers.

Dufferin-Caledon MPP Sylvia Jones also spoke and gave a certificate, saying being in a smaller community, the way organizations and groups work is unique.

“It's special, it's something we have to hold dear. Thank you for your commitment to our community, thank you for the work you're doing to make all of our lives better.”

Colleen Egan, a volunteer for the past two years, helped give pins to recognize various volunteers working for five, 10, 20, or 25 years, mentioning the roles they have at the food bank.

She says she hopes the 25th anniversary can make people more aware of the food bank and what it does for the community. “I know I had an image in my mind of what the food bank was, and I think when people come, they'll see it kind of differently. … We want to honor our volunteers.”