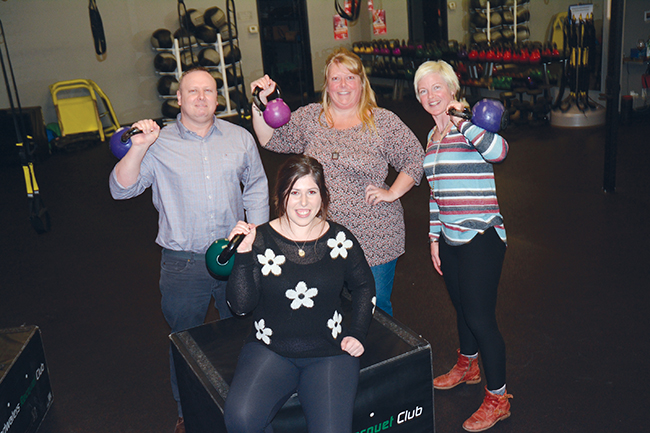 The Headwaters Racquet Club traded in racquets for dumbbells and exercise machines during the Better Body Challenge event.

While racquet sports never really stopped at the Club, the Challenge was an opportunity for participants to work through an eight week course designed to create a better body.

People worked as teams in the event and were measured for their progress as the weeks went by.

“There are teams of three. You're working to build as much muscle as possible and lose as much fat as possible, and try to get a better body,” explained organizer Jessica Keats-Marchildon, who also participated in the challenge. “It runs over a course of eight weeks. We recommend the participants do two, to four classes per week. It's interval based training so they are doing a variety of different exercises. It's essentially group personal training.”

Results are measured using an in-body scan that measures a person's body. Everyone is scanned at the beginning of the even and then again at the end to measure progress. Participants get points for muscle gained and fat lost.

“We also do a fitness component as well,” Ms. Keats-Marchildon explained. “You do a series of four different exercises. For example I participated myself. At the beginning of the challenge I could do ten push-ups, at the end I doubled it and could do 20.”

Participants were members of the club as well as non-members who signed up and took part.

At the end of the challenge the winning team was announced. There was also an award for the person who lost the most weight. During a final gala, the results and winners were announced.

Over the course of the eight weeks, 111 participants took part in the fifth-annual even and lost a total of 898 lbs, while gaining a muscle mass of 82 lbs. Lesley Brakel was the winner of the $500.00 biggest loser prize with a total of 29.3 pounds lost. The winning team of Margot Wymant, Laurence Wymant, and Chris Tworek, took home the grand prize of $3000.00, losing a total of 52.4 pounds of weight between the three of them while gaining 6.1 pounds of muscle mass.