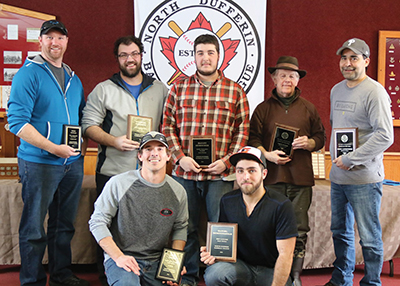 Teammate Jeff Christman picked up the top pitcher award in the division.

Nathan Lennox of the New Lowell Knights was the top junior batter for the season with a .479 average.

Konar Smith of the Ivy Rangers won the best on base percentage with .627 and had the most runs scored at 21.

In the senior division, Michael Gemmiti of the Bolton Dodgers topped three categories. He won the best batter award with a .494 average and was selected as the division's most valuable player and most sportsmanlike player.

Brad Crosby from the Aurora Jays finished first in the on base category with a .655 percentage.

Dan Morningstar of the Clearview Orioles was voted the best catcher.

Brad Greiveson of the Ivy Leafs won the top pitcher award for his tenth time in the last 11 years with 173 points, 14.5 points higher than runner-up Todd Gowan of the New Lowell Knights.

The coach of the year title went to Steve Lafreniere and Fred Flood of the Midland Indians after the team finished the regular season first in the East division and had a stellar year on the diamond.

The Ivy Leafs were recognized with the OBA plaque after the team won the provincial senior ‘A' title in September.

Following the awards, team representatives met for the first meeting of the 2017 season with an increase in games for senior teams.

A 30-game season has been approved as the Bolton Brewers returned from a two-year leave of absence and the Ivy Rangers moved up from junior to make an 18-team senior division.

The three remaining junior teams, Mansfield, Midland, and New Lowell, have been joined by a new entry from Lisle to continue at four teams.

The division will play an 18-game schedule.

The season begins the first weekend in May.