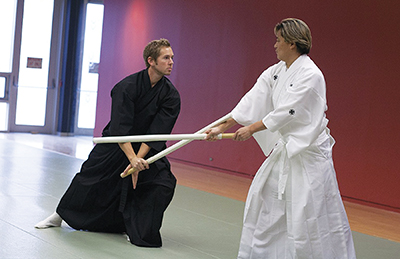 This annual event, the largest annual gathering of the Japanese community from Ontario and upstate New York, celebrates the return of Spring and is regularly attended by local and foreign dignitaries as well as thousands of people.

Seldom seen outside of Japan and almost never in public demonstrations in North America, the public was given a rare glimpse into this unique school of kenjutsu, the first sword style to blend Zen Buddhist philosophy with swordsmanship as this style strives to prevent unnecessary loss of life.

famous swordsman Miyamoto Musashi), which along with Yagyū Shinkage-ryū are generally considered to be three of the four major styles of traditional Japanese kenjutsu.

The public was treated to demonstrations of swordsmanship - some styles displaying strength and power - some lightning quick movements, while others showed grace and elegance.

“It is truly an honour to have the opportunity to showcase this art, this important part of their heritage and tradition, to the Japanese-Canadian community,” Sensei Tong said. “And it was also an important historic event as this is the first time that we have gotten so many famous classical schools to come together to demonstrate to the public.”