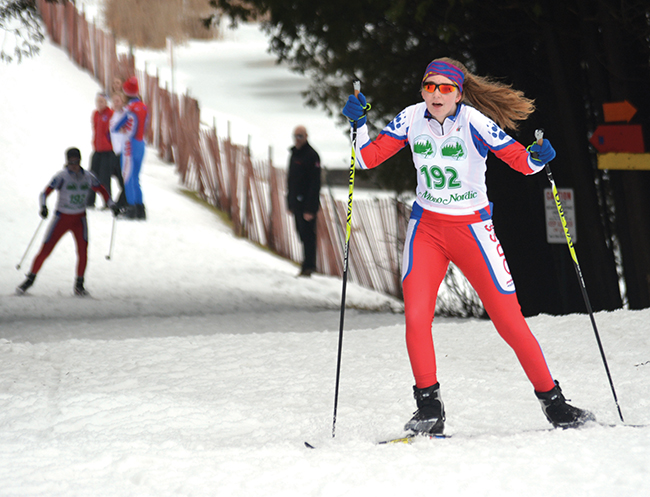 The sudden arrival of mild weather across the province may have melted a lot of snow but there was still plenty of the white stuff left on the groomed trails at Monora Park.

The annual Mono Nordic invitational meet got underway on Saturday, January 21, with skiers from around the region taking part.

It was a little slushy out there but there were still plenty of fast times on the circuit.

“We had some thaws and some freezes and it kind of welded the snow to the ground,” said race convenor Cullen Perry. “It the trees the conditions are even better. We can do a lot with very little snow.

This is an invitational even and it is annual. We've got clubs from Collingwood and Owen Sound, Hardwood up in Barrie, Algoma University, and we get a lot skiers out of Caledon. There's kids from several high schools. There's about 195 skiers here today.”

There are six categories of racers starting in the Atom division which are seven year-olds, going all the way up the Masters division.

Most of the participants were elementary school and high school age competitors.

There were also two para-Nordic skiers with visual disabilities who took part and completed a 2K course.

The race is part of a series that runs throughout Southern Ontario. There are a number of races in the province.

Competitors earn points in each race that goes toward a total a the end of the season.

Each skiers begins at the start line on their own and it is a timed event.

“It's a great way to inspire competition between clubs,” Mr. Perry said. “I coach nine to 13 year-olds. I want our kids, the kids that we coach, to be thinking about the kids from the other clubs as competitors, but

also later on they may become teammates at some point.”

Mr. Perry is a coach with the Club's Track Attack program - a program that teaches younger skiers to learn to train and race.

High school teams took part in the event with their results being totaled as part of their season. The Nordic Ski team from Orangeville District High School had both a boys and girls team entered.

While it may have been a little milder than normal for a Nordic event, it was a comfortable day for spectators who turned out to cheer on the skiers as the crossed the finish line.