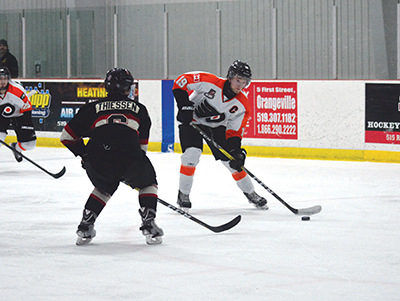 The Orangeville Junior A Flyers closed the gap late in the third period of Saturday's (Jan. 21) game against the Newmarket Hurricanes, but a final goal with six attackers on the ice was the final one for the night and the Flyers had to settle for a 4-3 loss.

Orangeville's Daniel Berno started off the scoring at just 21 seconds into Saturday's game for an early Flyers lead.

It didn't last long however, when Newmarket's responded with a goal a minute and a-half later.

A second Hurricanes goal at the midway mark gave the Newmarket team a 2-1 lead going into the second period.

Flyers defenceman, Michael Mannera tied the game at 1:16 into the second period after taking the feed from Ryan Barbosa.

Newmarket was again out in front on a pair of goals that gave them a 4-2 lead with one period left to go.

The Flyers put an extra attacker on the ice with almost three minutes left on the clock in a bid to get back in the game.

Zack Lyons made good and found the back of the net to make it a 4-3 game but that's all they could do for the night and they had to settle for the loss.

The loss leaves the Flyers with a 14-27-1 record including two OT losses.

The Georgetown Raiders are in first place in the West Division with 75 points, followed by Burlington in second with 59 points and Buffalo in number three spot with 39.

The Flyers will be back on home ice at the Alder Street arena in Orangeville on Saturday, February 4, to host the Milton IceHawks.