Rod Beattie is Walt Wingfield, and all the others 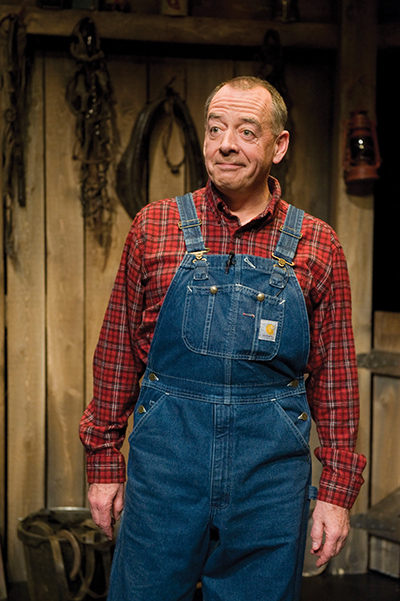 Warm welcome back to Walt Wingfield in Wingfield's Progress by Dan Needles, opening February 2 at Theatre Orangeville. This is number two in the seven play collection, all of which have played back and forth across the country for the last thirty years. That is to say, Wingfield's Progress is celebrating 30 years of being produced while numbers three to seven began being performed as they were written by Dan Needles.

Walt Wingfield and all the rather odd characters of his acquaintance are all played by the amazing Rod Beattie in a rapid fire succession of complete changes from one soul to the next, speech variations, stances, quirks, adapted with such polish as to think there are actually several people on the stage.

Furthermore, for all this time, across so much distance, only Mr Beattie has ever performed these eccentric, really funny and interesting plays. With no sequence in which any one of the seven are being performed at any given venue and, of several performances over a tour of months - he might do as many as 200 shows in a year -keeping them straight is a matter of discipline. His brother, Douglas Beattie has, equally, directed the plays and travelled with Rod Beattie and their simple set the entire time and distance.

“I've made a regime – I do one act of each play every day. It takes two hours but it keeps me in practice,” Mr. Beattie told us in a telephone interview late last week. He followed up with a bit of the history of the plays.

“‘Progress' was actually first performed at the Rainbow Theatre in Peterborough and later Orangeville. It was a week's add on after a run of Letters [from Wingfield Farm] and it sold out. After a couple of changes, we started running it.

“I contributed to the writing with Dan [ Needles]. Doug has always been the sober third eye.” He explained, “The classic process is me and Dan sitting together and making each other laugh and Doug pours cold water on us. You kind of get wedded to things that you like, that you've written and Doug says, ‘it doesn't matter if you two think it's funny, it matters that it is funny...'”

It has been a lot of years and a great many performances, so, a natural question was what keeps him at it: “Well, it was always the intention that I would do it. It was my brother's idea that I would do it, part of it is that I had part in the writing. It's the most fun I have on  stage. I love them [the characters] and I believe them – they're honest and true and good. Any they've become part of us,” he said.

Considering the whole picture, Mr. Beattie went on to comment, “It surprises me, in a way, that it has remained unique but no body wants to do what we do.”

He told us about another project he has developed: Christmas Carol. “I recently did [wrote] a version of Christmas Carol – I was everybody, connected by a narrator. Turned out it's a big hit and people loved it. It's an hour and five minutes without a break. Christmas Carol doesn't really have a logical half way point. It made me realize that what we do with Wingfield is definitely different.”

For the first time in 10 years, Rod Beattie is back to the Straford company, acting in three plays over the course of the Stratford Festival: Twelfth Night, School of Scandal and Tartuffe.

We took a moment to talk about Shakespeare.

“He is the most profound linguistic thinker in the history of the planet,” Mr. Beattie remarked mildly. “I've always thought of Shakespeare as the mecca of acting – the hardest but the most rewarding.

“The theatre is the place for Shakespeare,” he confirmed. “ If you do it for a long time, the plays speak differently over periods of your life. Not all plays can do that.”

Between tragedy, comedies and horrors, we were told, “He wrote most of the horrific stuff at the beginning. If you do a film and you do the dreadful things, it's terrific fun to do...”

Mr. Beattie is engaged with the Straford Festival from May until October, when he is immediately back to Wingfield in October, followed by his take on Christmas Carol.

“Theatres are clamouring for it,” he was happy to report.

As to why you will want to come and see Wingfield's Progress, Mr. Beattie suggested, “Dan always says that Wingfield is kind of the magic world in Orangeville. It started as letters to the editor in the Citizen which was the sister paper to the Shelburne Free Press.That really was what Doug thought this could be a one person show.

“It has the sensibility to the farming area in Orangeville. This play in particular with the threat of urban sprawl is really relevant to what's going on now.”

So, the whole history of Winfield is tied to Orangeville and Dufferin County. It is also wildly funny and an extraordinary performance by the remarkable Rod Beattie.