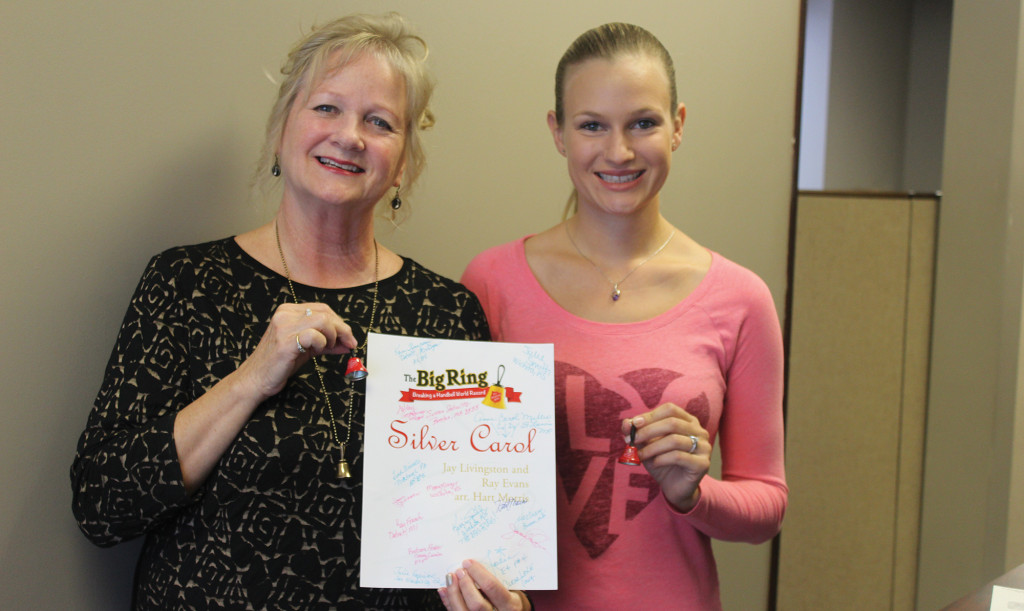 Two Orangeville residents proudly flew the flag for Canada last month as they participated in a successful world record attempt south of the border in Minneapolis, Minnesota.

Shirley Jemmett and Barbara Peaker were the lone Canadian representatives as 664 bell ringers from across the continent gathered at the Mall of America on Nov. 19 to break the world record for most handbell performers playing together in one location.

The ‘Big Ring' was hosted by the Handbell Musicians of America in collaboration with the Salvation Army and was a huge success, smashing the previous record set by 562 bell ringers in Japan in 2013 right out of the park.

Seasoned handbell players with years of experience both playing and directing programs within the local community and across Ontario through the Bells of Westminster, Mrs. Jemmett and Mrs. Peaker were both “blown away” by the experience in Minneapolis.

“If I had to rank it between one and 10, this trip would probably be somewhere near a million,” Mrs. Peaker said. “It was an incredible feeling actually being there, in the thick of the action. It's definitely the best experience I've had since I started bell-ringing all those years ago.”

Making a trip out of it, Mrs. Jemmett and Mrs. Peaker spent the weekend in Minneapolis, but the actual event itself, according to the pair, was over before they knew it.

“It was incredibly well organized,” Mrs. Jemmett said. “You would not think it possible to register, process and get bells assigned to almost 700 ringers in 45 minutes, but they managed it. The event itself ran seamlessly – it was such a pleasure to be a part of.”

The ringers played a specially composed piece that ran for six minutes and 15 seconds. The ‘Big Ring' provided both Mrs. Peaker and Mrs. Jemmett with a slightly unique experience on top of simply participating in a successful world record attempt. The pair each played a set of bells they're not usually accustomed to playing.

“I rang C4 and D4 – those are the bigger bells, which I'm not really used to playing,” Mrs. Jemmett said. “Barbara had the smaller bells – E6 and F6 – so we both got to try out something a little new. It was nice.”

With their names now etched in the record books, Mrs. Jemmett and Mrs. Peaker are left to reflect on the “wonderful” experience down in Minnesota.

“One of the things I've always said about bell ringing is that it's a great multi-generational activity, and the ‘Big Ring' down in Minneapolis was proof of that,” Mrs. Jemmett said. “There were children involved, teenagers, young adults, seniors, new mothers – it was incredible. It was one of the most diverse groups of people I think you could ever wish to see. Bell ringing has this unique ability to bring people together.”

Mrs. Peaker added, “Just like Shirley said, we were one big, giant, happy family down there. Everyone wanted to talk about their choirs, their churches and their experiences ringing. We all instantly had something in common, so it was very easy to bond. Looking back, I couldn't imagine not traveling down there and being a part of it all. I think the people that made the decision not to go missed out on something truly amazing.”

The Bells of Westminster have been busy over the Christmas period, spreading their unique sound across the community. The group meets at Westminster United Church every Tuesday from 7:30 p.m. to 9 p.m.

“We have a great group of players right now, but it would be nice to have a few more. If you're looking to try something new and have some fun while doing, come along and try out bell ringing. You won't regret it,” Mrs. Jemmett concluded.