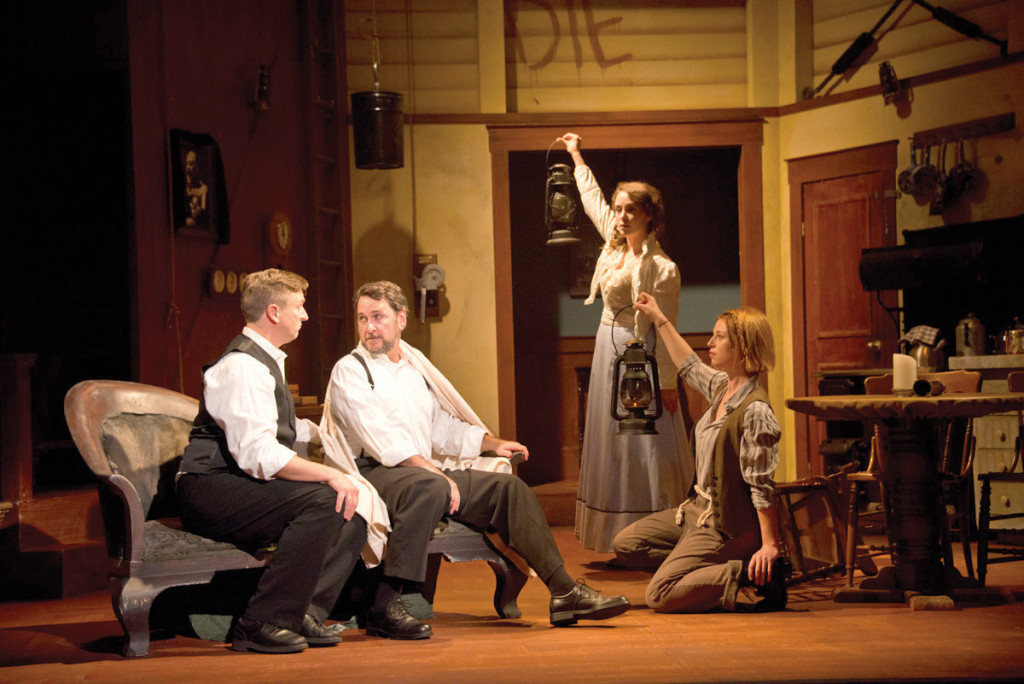 How does a man married to a beautiful, younger woman, persuade her to leave with him to a isolated lighthouse away from her admirers and social whirl?

He lies to her, of course.

A man of means with a successful shop, Josiah, having no qualifications for running a lighthouse, plots to spin the tale that will convince his wife to abandon their comfortable life for Ghost Island in the play of that name that opened last Thursday at Theatre Orangeville.

As with all subterfuge, everything is even rougher than imagined and the terrors, which at once, thrill the audience and make them hoot with laughter, one right after the other, only make things much harder for the struggling characters.

These are Josiah, played by David Rosser, and his lovely wife, Rowena, with Heidi Lynch in the role.

Mr. Rosser explained the basis of his deceptions: “I tell her we are broke and that my shop is out of business. All I can see is younger men ogling my wife. I need to get her alone.”

Set in 1913, this period play reminds the audience of the time people had to live in lighthouses which often stood in very remote locations, as a matter of life and death for those out on the water. The lighthouse stood as a warning of the rocks on the shoreline, as they still do but no longer needing hands to do the work that technology does now.

The lighthouse to which our heroes are retiring from society turns out to be “spartan and a wreck,” much worst than imagined. Added to this, the island lives up to its name and is haunted by spirits, not particularly benevolent spirits at that.

Helping these two are Josiah's assistant, Brandon, portrayed by Jeffrey Wetsch, and the tom boy/delivery girl, Erin, featuring Perrie Olthuis in the role.

Screams and laughter are promised.

“When we do the seance, the audience jumps and then laughs just as hard,” said Mr. Olthuis.  “How many times have you been on the stage when the audience is so involved with what's happening?”

And Mr Rosser added, “For me, I've been totally about the experience. This was a full experience for the audience.”

Not to forget that, officially, the Opera House is deemed to be haunted by a lady spirit. The paranormal people have come there more than once to declare, following their investigations, that she walks the halls.

Originally commissioned by Lighthouse Theatre in Port Dover, Ghost Island Light, by Peter Colley, renowned for his thriller plays, comes here a year after its first opening at Lighthouse with the same cast.

David Nairn, sitting in on the interview, remarked, “It's the second go for this team. In the throes of creative process, to be able to come back to it, there's time. Now there is the luxury after the premier discoveries – so you can revisit and enrich the whole experience.”

“There's meat on these bones,” from Mr. Rosser.

This is a genuinely funny, genuinely scary play, we were assured. Naturally, as this is Orangeville, it is guaranteed to be a quality show. Great fodder for the teenagers in our midst as well this time.

“It's a new experience for me to come back to a play with the same team,” Mr. Wetsch commented; “We all love doing this show.”

Ghost Island Light runs until Sunday, November 6. For more information about times, tickets and subscriptions ( by which you save money, catch all the shows and have five – or three -wonderful evenings/matinees of entertainment), visit the Box Office at 87 Broadway, call them at 519-942-3423 or go online at theatreorangeville.ca.