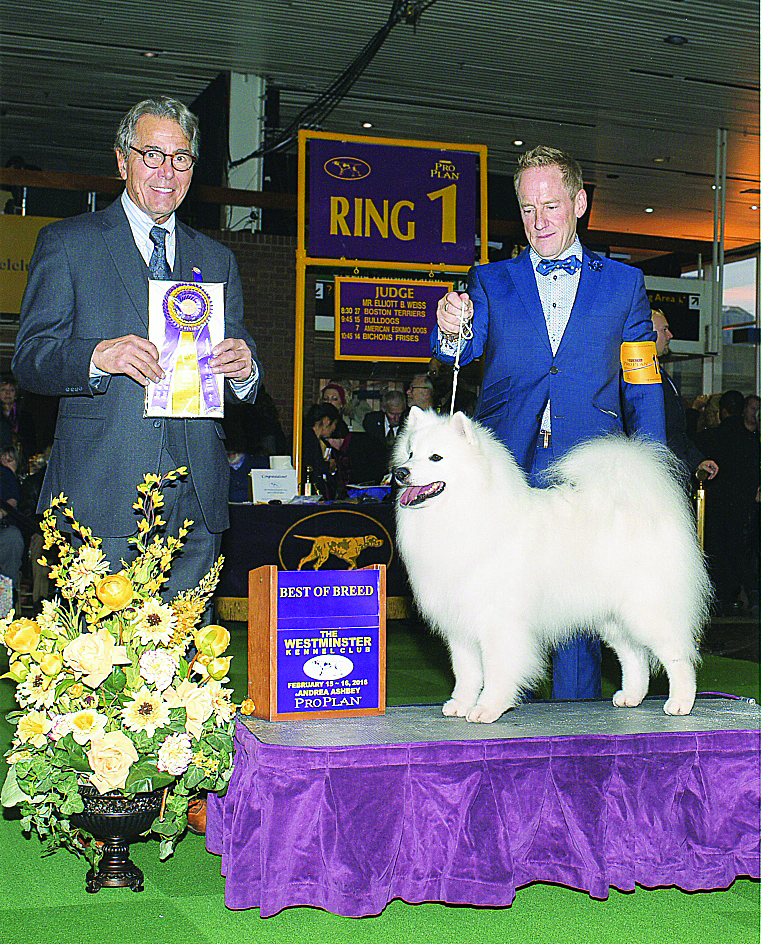 Inuk is a shining white American Eskimo Dog or Eskie, as they are called. At this year's Westminster Kennel Club Dog Show held in New York over the weekend of February 12 to 14 and through to the finals on Monday, February 15, Inuk chased and won Best of Breed for the eighth consecutive year, tying with just one other dog.

As Inuk's owner, local resident, Sharon Robertson told us, “In the 140 year history of the Westminster Kennel Club's dog show, there are only two dogs that have won eight years consecutively and Inuk is the second!”

Additionally, according to the Westminster Kennel dog Show website, last year, Inuk was the first Eskie to place in the non-sporting group at Westminster.

Originally from Germany, the Eskie is a wonderful family dog. Brilliantly white with medium length hair and a tail that curls back over the body, this midsized dog is both beautiful and kind.

“They were brought over as an all purpose dog,” Ms Robertson explained. “They are not watch dogs as such since they wouldn't attack a stranger but they give the alarm if anything out of the ordinary comes along. They are very eager to please, good agility and obedience. I have herded with Inuk.”

Living on 10 acres near Orangeville gives Ms Robertson's dogs plenty of space to run. The dogs are a hobby for her, not a business.  She said, “They are my pets.”

The story of Inuk's ascension to the big win in February does not necessarily display the peculiar drive and intention of many such competitive animal owners. It is more a tale of a dog with a natural flair for winning.

First of all, Ms Robertson hired a handler to show her dog. In the long run it was less expensive than handling all the costs of doing the show herself with the travelling and hotel expenses.

She told us how it works. “A handler may take from 10 to 15 dogs. He's responsible for bathing and grooming them all. So, his travel expenses are divided amongst all the dog owners and then he charges a handling fee for their individual needs.”

The gentleman Ms Robertson engages is Graeme Burdon who comes from Quebec, where he still lives. At the time of Inuk's first show in New York, Ms Robertson's children were still young. She also took into account the expertise of a person who is experienced in leading and walking with dogs in serious shows.

“Nine years ago – I had sent a dog previously years ago to New York. There's an energy there that that's difficult to explain,” Ms Robertson began by telling us. “That year, he [Inuk] finished his championship [Best of Breed] winning at only 14 months old and on his first trip to New York. Around the fifth time he won, I was beginning to wonder of anyone had won this many times consecutively. I discovered that another dog had won eight times. Then, after the sixth time he won, I thought we were within reach of the record. He had won five American Nationals as well.”

It is not only the USA that Inuk excels at dog shows. He has also won eight years consecutively as Number 1 American Eskimo Dog in Canada, for, of course, Inuk attends Canadian dog shows too.

If Inuk has a secret, it is his body language: a certain eagerness and an air of being a thoroughly pleasant fellow. He focuses on his handler and is not distracted at all by the business of the other dogs and people in the show room. All he seems to care about is having a nice time and going along with whatever Mr. Burdon asks of him. It is fun to watch. Curious about her background relevant to the dog world, Ms Robertson told us surprisingly, “No, we never had dogs when I was young. I had my first dog when I was 33.

My teen age son brought home a puppy that a neighbour with a litter of pups gave him.”

It was an Eskie. “Not a pure bred,” Ms Robertson commented. “But it looked like it.” The pup soon became her dog, vet bills and all, and led, in the long run, to the passionate hobby of dog shows and to Inuk being in her life.

“It isn't just the win for Inuk,” Ms Robertson reflected. “It's about the breed. In 20 years, people won't remember Inuk but they will remember the breed winning.”

As for what is next at Westminster, will Inuk go back next year to possibly break the record with a 10th win?

There was hesitation in her voice. Then she said, “We'll let the dog decide.”

Ms Robertson is President of the North American Eskimo Day Association of Canada.