Residents want to be in on plan for Caledon’s Badlands 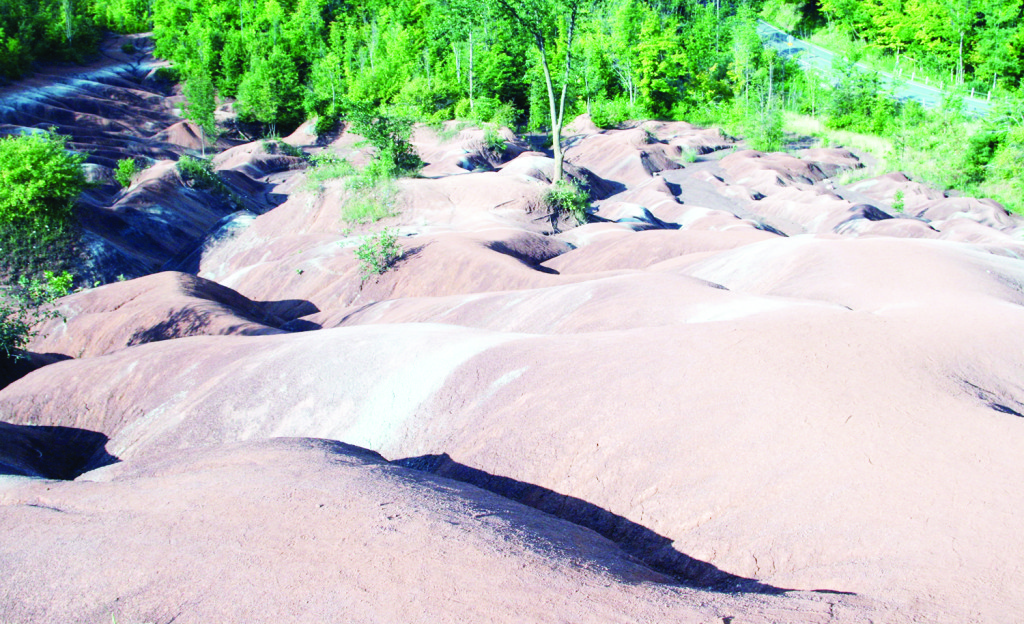 Parking is going to continue to be an issue when it comes to developing a master plan for the Cheltenham Badlands on Caledon's Olde Base Line.

About 60 people were on hand for a meeting on the matter Monday, hosted by the Ontario Heritage Trust (OHT), which owns the property, along with Dillon Consulting.

The meeting included an update on the work that has been done so far, and it was also an effort to gain public input.

“You all have a lot of wisdom in this room,” facilitator Karla Kolli remarked.

The striking landscape of the Badlands, located on the south side of Olde Base Line Road, east of Creditview Road, is one of Ontario's geological treasures and one of the best examples of badland topography in the province. The exposed bedrock at the Badlands is Queenston shale, and this iron-rich material was deposited more than 445 million years ago.

Due to removal of vegetation as the result of land clearing and livestock grazing in the early 1900s, the shale has eroded into a series of hummocks and gullies, producing the distinctive landscape.

Today, the Badlands is recognized as a provincially significant Area of Natural and Scientific Interest (ANSI).

The 36.6-hectare property was acquired in 2002 by OHT, and is managed by the Bruce Trail Conservancy (BTC).

Sean Fraser, director of heritage programs and operations for OHT, told the meeting that a management team has been formed. Caledon Councillor Johanna Downey is on it, as well as representation from other agencies. He added there have been calls to have the public more engaged in the process.

Mr. Fraser said plans are in the works for a residents' forum on the matter, probably in March. He added they would like to hold it near the site, if possible (Monday's meeting was at the Caledon Community Complex in Caledon East).

“We haven't done a great job of engaging with the residents,” he remarked.

Peel Region's announcement a couple of years ago of a plan to put in a parking lot at the northeast corner of the property sparked considerable controversy. One woman wanted to hear justification for such an idea, arguing it would have a significant impact in the site.

Mr. Fraser said the parking lot matter is to be the subject of a Niagara Escarpment Commission hearing next month.

One woman was not pleased with the proposed location of the parking lot.

“You really need to get your hair around that,” she said.

Mr. Fraser said the location was determined after consultation with the management team, and involved the Town, Region and the Niagara Escarpment Commission (NEC). He couldn't say if that would be the only parking area on the site.

Caledon Councillor Barb Shaughnessy wondered if the lot would be staffed. “It really can't be managed unless the management team actually has a responsible person on site,” she commented.

Concerns were also expressed about cars parking on Olde Base Line. The Region banned parking and stopping in the area of the property last year.

She explained that such access parks provide opportunities for public access through such facilities as the Bruce Trail.

Monday's public meeting was the second one of the study process, and it comes as the inventory and analysis stage is being completed. Ms. Marshall said the first public meeting was held in October, and two more are planned in the process.

She also said a number of techniques are being used in the public consultation process, including media and mailed notices, social media, a survey, etc. There have also been meetings with local interested groups, such as the Caledon Countryside Alliance. There have not been any site visits, largely because the site is closed and fenced.

Ms. Marshall said four guiding principles have been compiled for the development of the master plan: Conservation of the property's cultural and natural heritage values; Safety for all people who visit the site; improved accessibility for those who want to get on the property; and enhancing opportunities for interpretation and public education.

Summarizing the inventory and analysis, she said they are looking at the whole property, not just the actual Badlands, which takes up only part of the site. They have also looked for priority protections areas through mapping and evaluation

Christie Cestra, an associate with Dillon, said an adaptive management approach was seen as the best way to proceed. It will monitor ongoing physical, biological and social indicators. She said there are invasive species on the property, including garlic mustard and European Buckthorn. There's also evidence of emerald ash borer infestation, which is a worry because there are a lot of ash trees there. There will have to be management practices, which could include removal and replacement of affected trees.

In terms of managing visitors, Ms. Marshall said the plan is to have controlled access through natural areas through a system of trails and footpaths. People would also be restricted to more resilient areas, with rogue trails closed. She also said a report on these issues is coming.

Ms. Marshall also said public access to the actual Badland features of the site will be restricted to viewing. There would be problems with letting people right on the features, such as erosion, crowding and interrupting the views. One idea suggested is a viewing deck or boardwalk off Olde Base Line, although she stressed nothing has been decided yet.

As well, she said they have to find ways to manage erosion runoff from the Badlands.

The plan includes developing a hierarchy of trail types and designs, which would consider their carrying capacity, as well as visual and physical impacts. They will also look into looped trails, as well as chances for interpretive and educational signage.

Several people at the meeting were interested in the impact on local traffic. Mr. Fraser said OHT is responsible for what takes place on the property, and is limited in what it can do regarding the local traffic situation. He also said the management team does have representation from both the Town and Peel Region.

Caledon's Director of Public Works, David Loveridge, said a group is currently studying transportation issues in the western part of town. It has representation from Peel, as well as Credit Valley Conservation, and is studying a number of locations, including the Badlands, Belfountain and Forks of the Credit. He also said Peel did traffic counts during the fall colours season, and will be analyzing that data.

Mr. Loveridge also said he agreed with several at the meeting that residents have to be involved in the process. “We've got to bring the public back in.”

A fence was erected along Old Base Line last year to keep people off the Badlands. Mr. Fraser told the meeting it was put up as an interim measure, and there are currently no plans to take it down. He said there are other ways to manage people getting on the site.

One man said he drives by the site a couple of times a day, and has not seen any sign of people jumping the fence.

“It's really worked,” he said, although a couple of people in the room said there have been people getting over it.

Some at the meeting didn't seem to think that would be a bad thing.

“The Badland is going to turn into greenlands if you take all the foot traffic off of it,” one person observed.