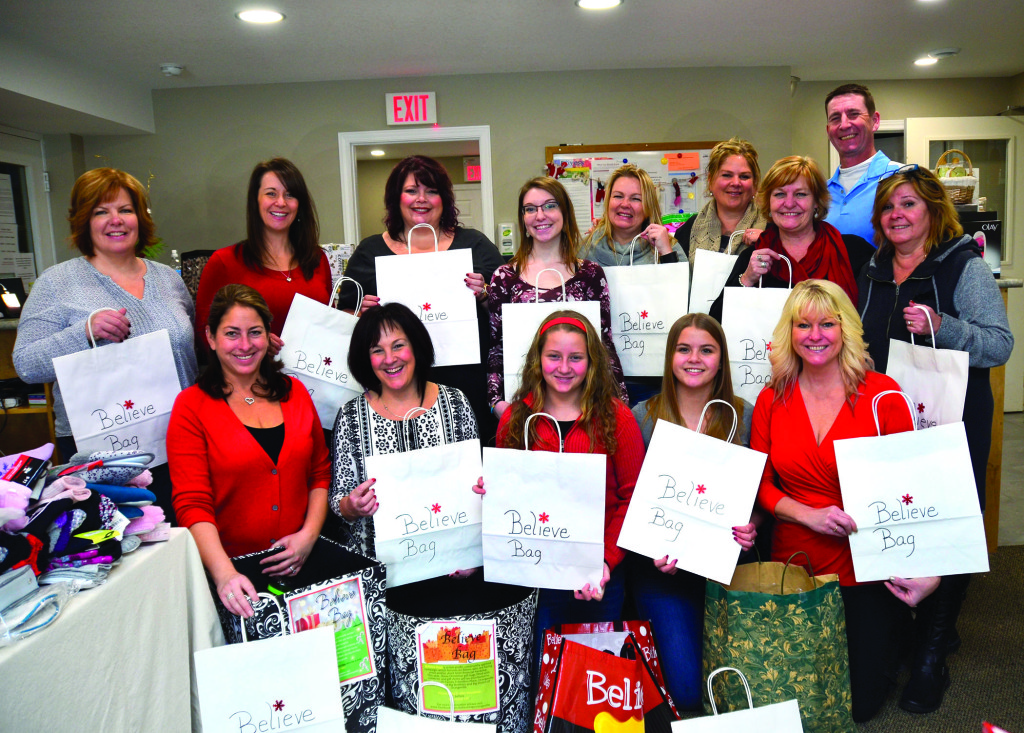 Orangeville's Believe Bags project, an annual collection held at Christmas by local resident Karen Ross-Smith, had another great year in 2015.

After founding the project in 2012, Ms. Ross-Smith has seen it grow exponentially, allowing her to touch the lives of others throughout the holiday season.

The idea developed from recognizing how many people seemed to go without, or had less at that time of year, and became a way for Ms. Ross-Smith to bless single moms in the community with a little something for themselves.

Although Orangeville has always been a community dedicated to helping others through many, many programs during the holidays, some still slip under the radar, and Ms. Ross-Smith was able to identify single moms who seemed to be in that group.

In an interview in 2014, Ms. Ross-Smith explained that she had seen something around town for almost every group, except single moms.

“I went different places and I saw Toys for Tots and I saw Christmas Hampers for Grandparents and all kinds of toy drives and coats for everybody but single moms,” she explained. “I thought to myself, ‘What do the moms do when they're scurrying to get gifts for their kids and everything and no one is looking after them?”

From there, she developed the idea of Believe Bags – bags filled with things that women enjoy, but those facing a difficult time might not be able to afford. The idea is to gather items that those in a stronger financial situation take for granted, such as makeup, candles, magazines – things that are more of a luxury to those on a low income, but could help those women feel more confident and better during their hard times.

In the first year, Ms. Ross-Smith was able to put together 12 bags, and by the third, the number had skyrocketed to 80.

This time, with the community's help, “we were able to build 150 bags to be distributed to single moms throughout our community,” said Ms. Ross-Smith via email. “I would like to thank of my family, friends and this unbelievable community for their ongoing support.”

Ms. Ross-Smith's contributions to the community have not gone unnoticed either. This year, local photographer Jim Waddington helped document some of the process, and photos from this Christmas available on the Believe Bags Facebook page at www.facebook.com/believebagsorangeville.

Late in 2015, one of Ms. Ross-Smith's friends nominated her for the chance to win a new car from Breakfast Television, and once the nomination page hit Facebook, it went viral. In December, Ms. Ross-Smith was invited on Breakfast Television, for what she thought was just an opportunity to speak about her work with Believe Bags. While there, they surprised her as the winner of a new Toyota.

When submitting the photo, Mr. Waddington requested a thank you for Karen, adding “Your community loves you!”

Believe Bags is an annual collection which begins in late November, and wraps up in time to deliver the bags before Christmas. For more information, visit their Facebook Page (outlined above).