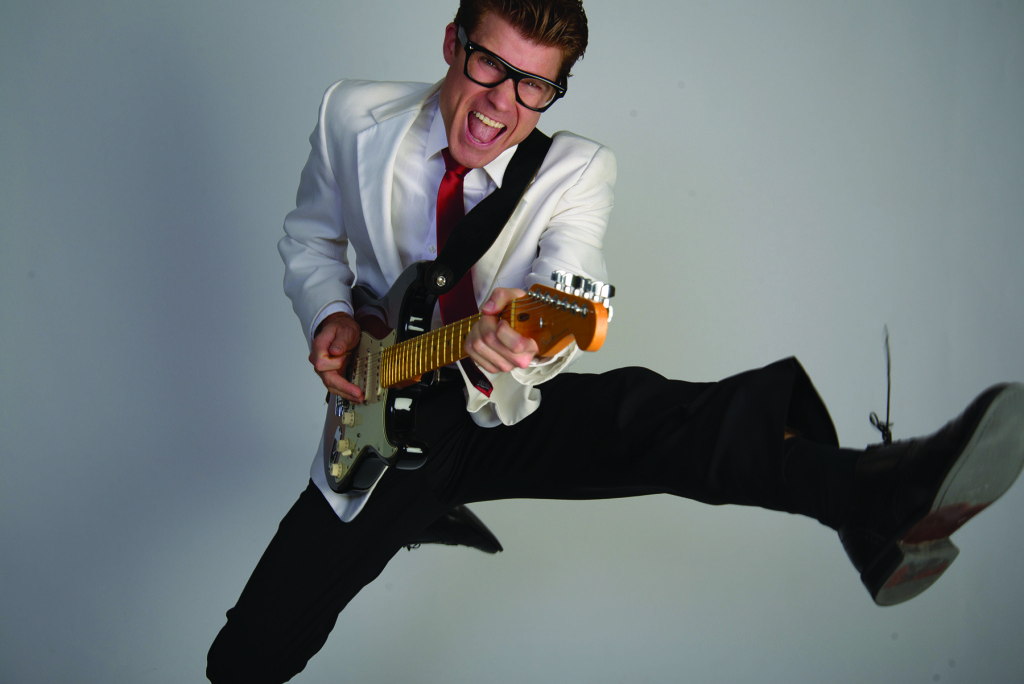 The Buddy Holly Story is known as “an oldie but a goodie.” Released in 1978, this biographical film follows the life story of a rock and roll musician, whose life goes from an incredible rise to stardom to an untimely death by a plane crash on February 3, 1959.

For all those who loved The Buddy Holly Story, a twist on the classic will be coming to the Orangeville Opera House on Sunday,  January 31 at 3 p.m. for a special matinee performance. Of course, Buddy Holly himself will not be starring in the show, but “the sexiest Buddy Holly ever,” Jeff Giles, will be taking over that role in the Buddy Holly: Rockin' Dance Party show.

Giles grew up in a little town near Hamilton, Stoney Creek. This town was the first place where he found his love for 50s rock music while searching through his father's old records. Ever since that day, 50s rock and roll music was Giles' favourite thing.

“Music has [always] been such a massive [and] important part of my life,” Giles explained, “I started working as an actor when I was about 15 and the music really developed alongside that. They had always kind of operated in tandem”.

Once he discovered his passion for acting while playing music and was absolutely sure about embracing that passion, Giles took matters into his own hands and enrolled in an acting program at York University in Toronto around 2006. A couple years later, an opportunity came up that he just couldn't ignore.

Around 2008, Giles auditioned for the part of Buddy Holly in The Buddy Holly: Rockin' Dance Party and got the chance to star in this upbeat tribute concert. Since 50s rock was the first genre to really and truly connect with Giles, getting this role was, and still is, a huge deal to him.

“I was particularly excited at the idea of doing a show like that where I got to play music as well as be an actor,” Giles confessed.

After receiving the role he dreamed of, Giles had the opportunity to travel all over Canada and even in a few European locations since the tour began back in 2008. Ever since the performance was showcased in a theatre in PEI, ‘everything snowballed' and became the performance that it is today.

January 31st will not be the first time he will be on a stage in Orangeville. He has been here a couple times and has even performed in a play around 2007. He and the rest of the Bill Culp Productions team really enjoy visiting small towns because of the vibes and the atmospheres projected towards them.

“I'm looking forward to coming back and doing [the show], which has become my main performance venue,” Giles said when asked his feelings towards coming to Orangeville.

“There [are] beautiful theatres and there's a community of people in these places that are always totally engaged, we love going to these kinds of places”.

Even though starring in The Buddy Holly: Rockin' Dance Party is jam-packed with excitement and thrills, it's not always fun and games when travelling around the country. There are some aspects of the tour that are long and boring such as the ‘logistical stuff' like the far distances or finding a place to eat that ‘isn't just Tim Hortons'.

“It can make for some long drives but it's great seeing the reaction that we get and the way that people are enjoying the show,” admits Giles.

That's the real reason why The Buddy Holly: Rockin' Dance Party is such a success – their dedication to all of the fans. Regardless of all the trials and tribulations that the tour may face along their journeys from city to city, it is all worth it to the actors in the end, especially to Giles.

“Every time I go out after the show, there's so many people who are coming up and they're just so excited, so lively, so jazzed up!” explained Giles, “We just [want to] let people know that they're going to have a great time if they come out”.

The show having been such a big hit in various other cities and towns across Canada, there is no doubt that The Buddy Holly: Rockin' Dance Party will be the performance of a lifetime for all who attend.

Throughout the show, Jeff Giles and the Memphis Cats band will be performing all of Buddy Holly's biggest hits such as “Peggy Sue”, “Rave On”, and “That'll Be The Day”, along with many other audience favourites that will make viewers want to get out of their seats and rock along.

Tickets are now on sale for $35 all-inclusive and are available at the theatre box office or by calling the Opera House at 519-942-3423.

You don't want to miss out on the incredible remake of a timeless classic so get your tickets soon so you, too, can ‘share in the beauty and the power of the music' with Jeff Giles and the rest of the cast.