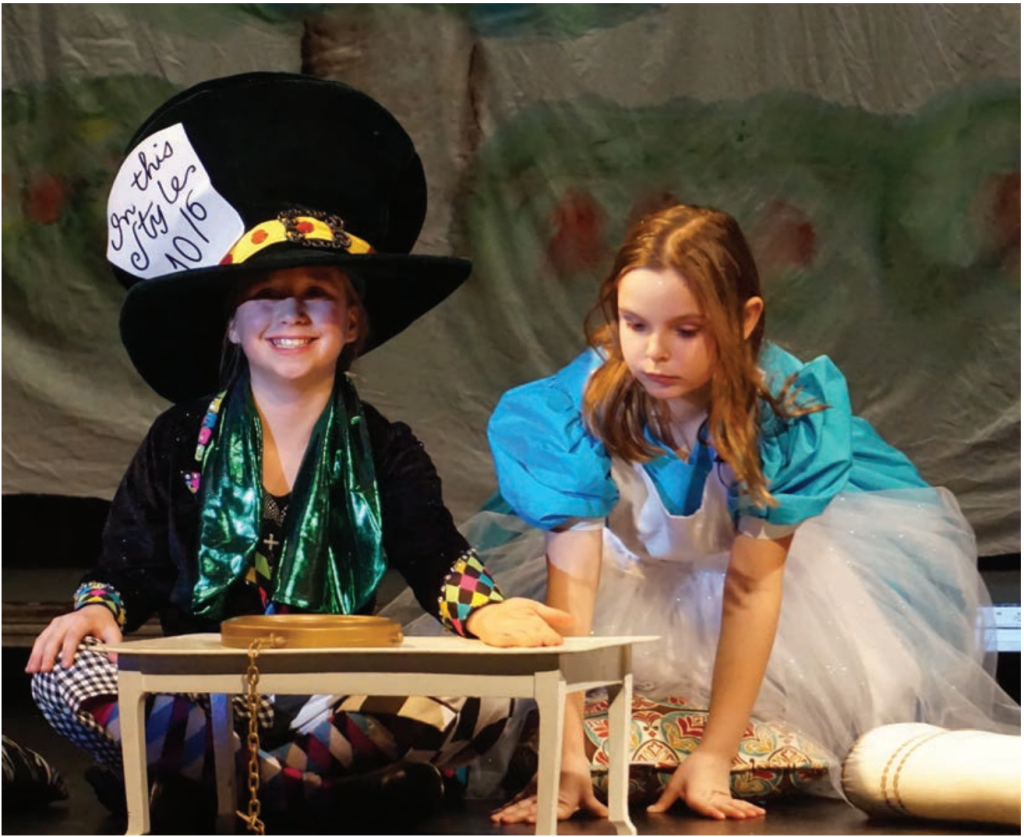 The bubbling, eccentric story of Alice in Wonderland is opening with the junior cast of Orangeville Music Theatre (OMT) this weekend, from tomorrow night (January 22) to Sunday, Jan. 24.

Although it is the shorter version rather than the full, all your favourite characters will be in attendance: Alice herself, of course, the Cheshire Cat, the Queen of Hearts, Twiddle Dee and his twin, Twiddle Dum, and so forth with a cast of 32 children ages from six to 15 years.

Filled, as always, with enthusiasm for the production, OMT vice-president Amanda Laughlin, told us: “People love this story. One of the most intriguing parts of this version is that two of the main characters have been written to be played by multiple actors. Alice is played by three people. Ella Brown plays Alice and then, Makayla Broom and Meghan Desaulniers do the roles of Small Alice and Big Alice.”

This innovative take on the portrayal of a character extends to the Cheshire Cat as well, with another three actors, each a very “distinct” personality, who come together to create a very humorous Cat.

Ms. Laughlin explained the differences between the full and the junior versions of any show.

“The full version,” she said, “usually runs about two hours but the junior show is more like an hour or 70 minutes in length and is for children.”

They are sticking pretty closely to the Disney version which, of course, is a musical. Directing this show is Bailey Mills, who has been with OMT for 17 years, starting as a child in the chorus and going on to act and participate in many ways with the group.

Of all the virtues of this show, the costumes earned special praise from Ms. Laughlin: “The costumes are just spectacular,” she declared. “Bobbi Ferguson does them all herself. We just did Little Mermaid and now Alice – she had to make the costumes for the two shows at the same time.”

A word with this paragon of costume producing, we thought, would certainly be interesting. So, we were invited to give her a call.

She answered the telephone like a busy person, explaining, “[doing the costumes for two shows at once] is maybe a little nuts.”

While Ms. Ferguson works mainly on her own, she said “some moms are very helpful. Not many know how to sew but for sticking feathers on – that sort of thing, we couldn't do without them.”

Having worked for many years in marketing, Ms. Ferguson said, “I stepped away from corporate life. I was used to flying around on business, always away from home. Then, when you're home all the time, you think, what do I do? So, this is what I do.”

Her first show, making costumes with OMT, was for Shrek. Her daughter, Raeburn, was in the show as Fiona and Raebuen has continued in theatre, both professionally and with OMT. This time, Raeburn Ferguson is doing the lighting for Alice in Wonderland.

Whether her daughter is in the show or not, Ms Ferguson loves being involved. “I love it,” she said simply, “I love the theatre. I always have.”

Asked if she has used her talents as costume maker as a new business, she replied, “I have made some specialty costumes for the dance studios. I do some one offs.”

Especially for a production like this one, everyone involved is a volunteer, which, considering how so many of the crew and cast return to participate in other productions over the years speaks well for the people who run it.

For tickets, call 519-942-3423 or online at www.orangevillemusictheatre.com