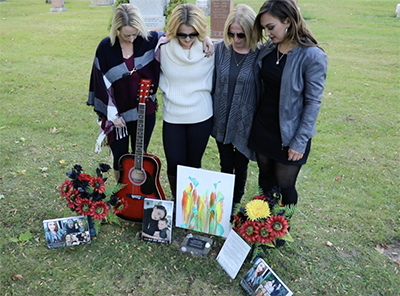 It has been a difficult few months for local musician Sara Rose who, in the midst of the global COVID-19 pandemic, has had to come to terms with a devastating loss. Now, she's aiming to project her own personal heartache into a message of hope through the release of a new single designed to remind people they are not alone during these unprecedented times.

On May 22, Sara received a phone call that would change her life. One of her best friends, Ashton Johnston-Kimberley, had passed away.

“I found out the day after she had passed. When I got the call, I didn't quite know how to react. I wasn't expecting it, I don't think anyone was,” Sara told the Citizen. “It's complete disbelief when you get a call like that. There was a mix of denial, but also instant numbness. It is definitely hard.”

Not really knowing what to do or where to turn, Sara poured herself into her music. She wrote ‘Ashton's Song', initially for herself, to help her deal with the heartbreak of losing such a close friend.

After sharing the song with Ashton's family, she was encouraged to release it to a wider audience. Sara spent months refining the lyrics and perfecting the rhythm and flow of the song. She worked with Dennis Hahn, of The Campfire Poets, to produce the song and has put together a music video to commemorate the piece. Ashton's Song will be released on all musical formats today (Oct. 8).

With music playing such a major role in Sara's life, it was perhaps inevitable that she would use it as an outlet for her grief. Now, she's hoping to turn ‘Ashton's Song' into a beacon of hope for anyone going through a difficult time with loss.

“Music is always the thing I turn to, both for good and bad things. This song just kind of happened. It wasn't ever going to be anything I would share outside of my circle, but when I saw the purpose it was giving me, and Ashton's family, and realized the potential it had to help other people, that's when I thought it could fulfill a greater purpose beyond the immense purpose it was giving to our small circle of family and friends.”

She added, “The main thing for me, obviously, is to honour Ashton and her family. But if this helps even one person beyond that, then it's forever worthy of sharing.”

One person it has certainly helped is Pat Kimberley, Ashton's grandmother. While she admitted to going through something of an emotional rollercoaster each and every time she hears the song, she said Sara had done a fantastic job putting together such a beautiful tribute.

“There are tears when we hear it, there's lots of emotions. It doesn't get easier for us to listen to it at all, but it is a beautiful tribute,” Pat said. “After the first time I heard it, I suggested to Sara that she release it. I thought if it's helped us, this is the sort of thing that could help somebody else going through a similar thing. There are certain parts of the song that will definitely help people.”

When asked where this latest single stacks up against the rest of her body of work, Sara said ‘Ashton's Song' will forever sit in a category of its own.

“I don't think this work can be compared to anything else I've done. It's totally different,” Sara said. “Everything I've written is always true, it's always real, but this goes beyond that. Every song I've ever written, when I'm finished I've been able to look back and say ‘okay, that's finished', and I can remove myself from it a little bit. With this one, I feel like I'm always going to be in it. The feelings I have and the emotions I poured into the song are always going to be there.”

With that said, it came as no surprise when Sara stated, point blank, this was the most difficult project she has ever worked on. Grief works in strange ways, and while she says she has worked through all the stages in recent months, working on different aspects of the song, and even talking about it in the lead up to the release has, on several occasions, seen the pain and emotion come flooding back.

To get through it, Sara has tapped into her own personal memory bank, remembering all the good times she and Ashton have had over their near decade-long friendship.

“We met in Grade 9 at Orangeville District Secondary School, and had some really fun times. Ashton and I had one of those relationships that just clicked. She was my rock for many years, and I think it went both ways. We went through a lot together and helped each other through some really difficult times,” Sara said.

She added, “Thinking about those good times helps, but there are still moments where it's really tough. When my phone rings, I still look to see if it's Ashton calling me. I know that she's gone, but deep down I still don't think I've come to terms with it.”