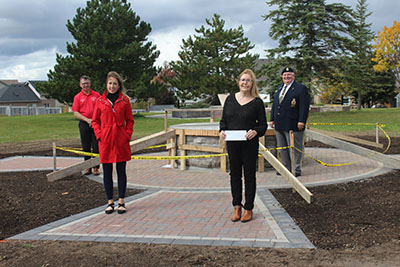 The Citizen reported last November that the initiative, located on the grounds of the Alder Recreation Centre, would be complete this summer. Unfortunately, due to the ongoing COVID-19 pandemic, the mother-daughter duo behind the project, Shannon and Valerie McGrady, have had issues putting the finishing touches together.

Gathering at the site last Thursday (Oct. 1), the McGradys said they are now actively planning for a grand opening of Bravery Park in summer 2021.

The Bravery Park project was first launched by Shannon and Valerie back in 2010 as they sought to provide local residents with a place of reflection to honour the bravery, achievements and sacrifices of members of the Canadian military. The park, which will boast four key features upon completion, sits on parkland to the east of the Alder Recreation Centre.

While the notion of Bravery Park today represents a number of positive ideologies, according to Shannon, it was one born out of tragedy. On May 25, 2007, Orangeville native Matthew McCully – brother to Shannon and son to Valerie, was killed by a roadside bomb near a small village outside of Kandahar City, Afghanistan. In what was his second tour of the war-torn Middle Eastern nation, Cpl. McCully was a member of the Operation Mentoring and Liaison Team that trained Afghani soldiers before his untimely death.

The first phase of development at Bravery Park saw a playground, funded by the Amaranth Lion's Club to the tune of $34,000, and a medicine wheel, funded and constructed by the Dufferin County Cultural Resource Circle, completed last summer. Work on the second and final phase, which boasts a memorial stone and seven-foot bronze monument, depicting a Canadian soldier kneeling beside two Afghani children, is currently underway.

In total, the project, upon completion, will have cost approximately $180,000. Shannon informed the Citizen that she is currently $14,000 shy of her fundraising goal.

The McGradys met with Orangeville Legion President Barry Kimber and Rory MacKinnon, owner of the McDonald's on Riddell Rd. and a long-time supporter of the Bravery Park initiative, to provide an update on the site's construction.

“After many years of work, dogged determination and community support, Bravery Park construction is now underway. The Victoria Cross, the highest and most prestigious award in the military has been created through intricate brick laying. The statue, in storage currently awaiting its debut, will sit at the centre of the cross atop a large stone, with gardens all around.”

She added, “Our memorial stone will be delivered this week. The stone is significant to the overall meaning of the park as it draws visitors' attention to the sacrifice our soldiers make to promote peace here at home and worldwide. The experience of a soldier is multifaceted, and so too is their suffering. They make many sacrifices. By walking through the park and learning about our military we hope to foster a culture of support so that when our soldiers return home and see parks like Bravery Park, they will know their sacrifices were not in vain.”

The Orangeville Legion has donated approximately $3,000 towards construction of Bravery Park, while Mr. MacKinnon has given approximately $10,000. The pair spoke about the importance of the initiative with the Citizen last week.

“From our point of view, it's all about remembrance, about recognizing service and about recognizing our veterans. To see a project like this finally coming together, it's nothing but good for the community,” said Mr. Kimber.

Mr. MacKinnon noted, “We connected with Shannon early on, and when they told us about the Bravery Park project we knew it was a great fit for the type of projects we like to support. This is focused on kids, it's focused on remembrance and it's focused on respect for our Canadian forces veterans and people serving today. This is a tremendous space now, and we are so proud to be a part of it.”

Obviously, Bravery Park holds tremendous personal meaning for both Shannon and Valerie. The pair took a moment to address just what it means to them to know the project is on the cusp of completion, following a decade-long fundraising campaign.

“Although it took years to get this far, the entire journey has been worth it, as every presentation, every update to council, and every post on social media has generated awareness of our military and all they do around the world. That's been our goal all along,” Shannon said. “I will be absolutely thrilled to see Bravery Park finally come to fruition.”

Valerie added, “It feels wonderful to be on the final stretch. There are two things that have kept me going throughout all of us. First, when I told soldiers and veterans about this park recognizing their bravery, many teared up knowing they were being honoured in this way. They do not see themselves as heroes, but simply doing the job they were trained to do. Secondly, to have the Town of Orangeville stand behind us all the way and give support (has) helped make our ideas even better. This journey has certainly had its ups and downs, but now it's all worth it.”