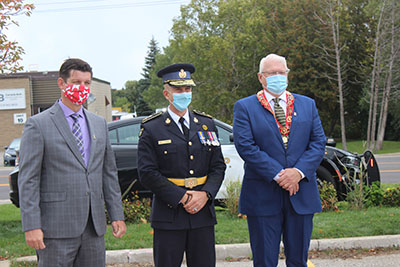 The Ontario Provincial Police (OPP) officially took over policing services in Orangeville last Thursday (Oct. 1), marking the occasion with a private ceremony at the local police station, located on C-Line.

Local dignitaries including Mayor Sandy Brown, Coun. Todd Taylor and Coun. Debbie Sherwood were joined by members of the Orangeville Police Services Board, Town staff and OPP top brass at the ceremony, officially welcoming the provincial force to the community.

“The Town of Orangeville played hard to get, but you finally get to take her home from the dance,” said Mayor Brown, directed towards OPP officials. “This courtship started in earnest during the lead up to the 2014 municipal election. Now, here we are six years later and looking forward to this new partnership with anticipation and complete confidence in the decision (Orangeville council made in December).”

At that tumultuous council meeting late last year, the majority of Orangeville Council, in a six to one vote, decided to disband the Orangeville Police Service (OPS) in favour of adopting a policing model run by the OPP. It has been estimated the Town will save as much as $58 million by 2036 by transitioning to the provincial force.

While there may well be savings in the long-term, the Town is projecting a considerable loss in the first year of its contract with the OPP. The bulk of that can be attributed to the approximately $7.5 million in one-time transitional costs, which will cover renovations to the existing police station on C-Line, severance to OPS staff not transitioning to the OPP, and the purchase of new equipment and vehicles.

The bulk of those costs will be covered by municipal reserves. Orangeville CAO Ed Brennan has predicted that any money taken out of reserves will be replenished over a five-year period. A consultant hired by the Town to take a deep dive into the financials of both OPS and OPP predicted the municipality would, by 2024, save an average of $4.66 million annually by transitioning to the provincial force.

It has now been confirmed that, of the 42 full-time police officers previously employed by OPS, the OPP has hired 28 of them to similar full-time positions. Five OPS officers who applied for positions with the OPP were not hired, while nine outgoing members of OPS decided against applying for a job with the provincial force. It has not been confirmed at this time how many of the 28 civilian members of OPS have been retained by the OPP, although it has previously been stated there are 14 civilian positions available in Orangeville.

With OPS Chief Wayne Kalinski officially retiring following 41 years of policing service, nine of them spent in Orangeville, the new force charged with keeping the community safe will be operating under new leadership. Nicol Randall, detachment commander of Dufferin OPP, will assume the role on an interim basis, until such a time as the Town and OPP can name a permanent successor.

Coun. Taylor, who also serves as chair of the Orangeville Police Services Board, took a moment last week to recognize the hard work and dedication of all OPS staff throughout this tough transition.

“Chief Kalinski and his team have made a positive impact on Orangeville. I'm thankful for their community activism and contributions to the safety of our town. They will not be forgotten,” Coun. Taylor said.  “There is no doubt that the policing process was divisive. A majority decision was made to make a significant change. As such, I ask that our citizens work to make our new OPP service successful. Support them. Embrace them. Welcome them. I fully intend to do the same.”

Thomas Carrique, Commissioner of the OPP, made the trip to Orangeville last week to mark the transition ceremony. After being welcomed by both Mayor Brown and Coun. Taylor, Mr. Carrique took a moment to address the OPP's newest community.

“We consider it an honour and a privilege that you have selected us as your police service, to continue a strong tradition of community-minded policing that has been done so well by OPS under the leadership of Wayne Kalinski,” Mr. Carrique said. “We look forward to partnering with you and look forward to earning your trust and confidence. It's so important to have the support of the communities of which we are trusted to support and protect. Policing is about people. Policing is about partnerships.”

With all 28 new members of the OPP, transitioning from OPS, partaking in a four-week training course in Orillia, the OPP has confirmed that OPP officers from Dufferin and other nearby detachments would provide coverage of calls for service for Orangeville throughout October.

Renovations to the Orangeville police station are ongoing. Andrea McKinney, the Town's General Manager of Corporate Services, said construction is moving ahead “as planned”. It was estimated back in 2019 that renovations of the facility would set the Town back approximately $1.2 million.

While OPP reported they enjoyed a “productive” first weekend in Orangeville, charging two individuals with impaired driving and a third with eight counts of prohibited driving, former Orangeville Mayor Jeremy Williams expressed his belief that the provincial force was off to a “rocky start” in town followed a botched RIDE check carried out on B-Line.

“Disheartened at what I saw today. OPP officers conducted a RIDE check at the top of a hill, where anyone intoxicated could have easily seen them blocks away and turned off to avoid being stopped,” Mayor Williams wrote. “Not one officer was wearing a mask. How would you feel having a stranger lean toward your open car window with no mask, especially by someone who is in constant close contact with hundreds of people.”

To make matters worse, Mr. Williams claimed he had an immuno-compromised individual in his passenger seat.

Following up on Mr. Williams' concern, the official social media account for the OPP says they have forwarded all concerns to Ms. Randall. In the response, it is implied that all OPP officers should, when possible, be wearing a face covering when engaging with members of the public.

“Our officers have been trained to manage COVID-19 safety precautions, including the wearing of personal protective equipment and maintaining physical distancing where possible, while balancing the need to ascertain the identity of a driver or properly assess sobriety of drivers at RIDE checks,” the reply states. “Each circumstance is different and officers are required to rely on their training, experience and proper use of police discretion when responding to a police matter.”