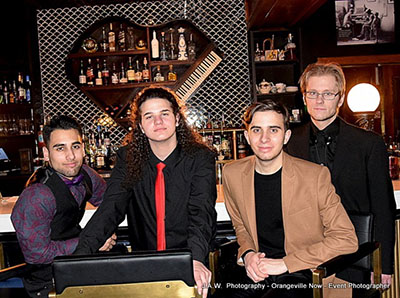 “Let me tell you, last night brought such joy to my heart,” David Nairn remarked to the Citizen. “The theatre was full of colour, vitality, enchantment – love – when we had real people in the theatre doing what they do best.”

That marvel was staged by nine members of Theatre Orangeville's crew, including, David Nairn and the four star musicians, central to the show.

“So, the way the stuff works,” Mr. Nairn began to clarify: “We brought Nicolas [Mustapha] and the other three musicians, comprising their band ToneFusion. They did a 50 minute concert and we videotaped it for Oct. 16; we recorded it for the link.”

In a COVID-19 free world, that would have been this season's opening night.

“People support Theatre Orangeville, and emerging young artists, many of them from this area,” he added.

“We're super busy; you wouldn't believe the work load, because we're creating the Theatre Orangeville Online series of entertainment and engagements. This is a huge learning curve for us because we're not film makers. We've engaged a local artist, a videographer, Sara May. She's a local musician and videographer.

“Nicolas' ToneFusion: a more talented group of musicians I haven't seen for a while... they raised the roof.”

Back to basics, “Nothing will ever replace live – online is short term,” while admitting that all these lessons may well have applications in the future.

“As is often the case, we are inventing as we go,” he continued. “We're acting as front runners. Only a handful of theatres are following this trail.

“This can be for all ages,” he expanded. “We're looking to schools to present online [theatrical] things for students at school; so, they feel they can participate in all this albeit in different locations.”

David Nairn told the Citizen, “We're now putting together a Halloween show, calling it Phantoms of the Opera House. Our favourite writers; Mag Ruffman is in, a little bit of our who's who – Dan (Needles), others that want to scare the pants off our patrons. This is for late October. The dates and details are still being worked out.”

Mr. Nairn wanted the format to be clear: “It's really important for people to understand: this is not just a ticket; you are purchasing your link to the show. When you buy the link you have two weeks to watch it. Once it goes live, when I say, “Thursday, Oct. 16, at 7 p.m.,” but they can watch it any time for two weeks and then the link disappears.”

Going on to enlarge, “All these events we're creating will never go on social media, never shared, copied, etc. The same as a live show, in that once it's done, it's done.”

Said Mr. Nairn for emphasis, “In that sense, it's special.”

Still to come is Rage against Violence, a monologue performed by 12 actors in a “reading,” in November, with proceeds going to Family TransitionPlace.

There will be an online reading of A Christmas Carol, in December. And a World Premier of an exciting new show – Rockin' around the Christmas Tree, by Leisa Way and the Wayward Wind Band.

“The word now to is ‘pivot to creating new arrangements to produce these shows. What we know, at the end of it last night, there's nothing to compare to live. Our core values and beliefs haven't changed and our creating ethos has not changed; how we're delivering it has changed.

“But we will be back in the theatre, doing live performances. I sound like Dame Vera Lynn.

“We have to keep the theatre viable financially. Most important that it survives, spiritually and what it means to the theatre arts and community.”

Meanwhile, “You know what – it's thrilling, exhilarating. It's because of the federal government support. I don't see any other way, just to be able to keep our way, to keep our audience engaged, that support, which has been extended now until the summer of 2021.”

Said Nicolas Mustapha, separately and a few moments later, of ToneFusion: “I came up with the name; I love the idea of two tones fusion. It really relates to who I am, not only my music but my identity is fusion: my mother is Venezuelan. My dad is from Trinidad and Tobago, but they met here in Canada.”

“My band is also of race fusion,” Nicolas told us. “As a band we really merge all styles together; play to each other's strengths and physicality. It's a lot of fun. We even recorded a Christmas album early this weekend.”

Being home schooled has given Nicolas his work ethic.

“Now looking the way I work and the drive that I have is all about being home schooled and the efforts my mom put into our education,” Nicolas said. “I'm in first year at Humber doing all the work online – taking Batchelor of Music, performance, specializing in composition. I always try to see the best in things, rather than the negative - I think that's a waste of time – if you can allow yourself to make the best of the moment, that will you allow you to get ahead.

“We've been just trying to get together to make the show happen at Theatre Orangeville.”

David Nairn has high praise for the arrangement of Over the Rainbow in the upcoming show.

“I arranged it,” said Nicolas. “The conflict of sounds between major and minor. It's a different arrangement that nobody's ever heard before. That can be a very fine line, making people feel good, having an emotion or a thought.”
Matteo offered, “I wrote [a new song] Please. I wrote it –I had everything in my head; I wrote out the music a few hours before I got to rehearsal. No one had heard the song but me. I felt something unreal – one of your original songs is being heard, ‘specially me, a drummer. I kinda wanted to break those barriers. The guys [suggested] their own arrangements and it became amazing.

“When ...everyone believes in what we're playing, it's so raw. There are endless possibilities in jazz; there's always the next level. We're so instinctive with each other.”

When Chris first played with them, “I remember the first time: do you know this -yeah – a different key – yeah - and then we heard it.”

Matthew's ambition: “I would say when we started and it's only a year ago, just a year and we see how close we're connecting together to think. We got opportunities to play – then we were shut down. I think we'll be okay.”

“A lot of times, I'll be the one doing bookings,” Nicolas commented. “My big goal is trans province tours when we'll be able to do festivals, national tours; Europe and playing two countries, as a musician and an artist.”

To other artists, from Nicolas, “I would say it's scary at first to think about putting yourself out there as an artist but I would also say that beginning to spread your true self and giving people the chance to welcome your ideas – giving people a cathartic moment -start expressing yourself and you'll surprised at how people will appreciate your endeavours.”

Matteo expressed his thoughts: “I believe everything if you find something you want to do, you're fine. I don't think it's ever too late to express what you love; instead of finding a way to get better than someone else, try to get better than yourself and be humble while you're doing it. I don't there's a limit to your passion.”

For all the details about the upcoming concert at Theatre Orangeville, go to www.theatreorangeville.ca. You can call as well: 519-941-3423.