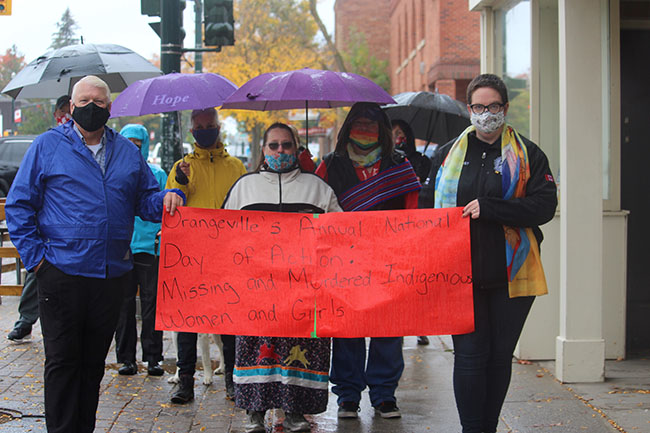 From the Orangeville courthouse to Town Hall, they marched in the rain carrying a red sign that reads “no more stolen sisters” – calling for change.

“There are stolen sisters across the country, and we need to make sure that they're not forgotten,” said Debbie Sipkema, organizer of the local march and co-founder of Dufferin County Culture Resource Circle (DCCRC).

The small group of nine consisting of local councillors and community members gathered for the march on Sunday (Oct. 4) as part of the national day of action for missing and murdered indigenous women and girls.

“It's a very important issue that's been brought to light here, missing and murdered Indigenous women and girls, it's something that we all are concerned about,” said Mayor Sandy Brown, who took part in the march. “I know that because the light's been shone on it now that people are much more aware of these issues, and  wecertainly need to stop that from happening.”

The day honours the lives of missing and murdered Indigenous women and girls.

“A lot of the people that have gone missing, were not even regarded as being something to worry about,” said Sipkema. “By having the people show up here, we're showing a whole different side of Orangeville and the growing understanding of the importance of the Indigenous community to the area.”

She added, “I can't do too much outside of where I live, but I can make the changes here and, if you see, we have some council members who have come out so already we have changes that are slowly happening.”

The final report had 231 calls for justice to end the genocide against Indigenous women and girls that the report says are “not simply moral principles” but “legal imperatives”.

“These Calls for Justice, as their name implies, demand action that reflects, respects, and actively works to create relationships where Indigenous women, girls, and LGBTQ people are recognized as rights bearers and have those right upheld – working to address where justice, seen in the larger context of dispossession and marginalization, has failed,” reads the report.

Over a year since the final report was released and Sipkema notes the need to keep pushing for change.

“We still need to make sure that we keep it going so that we can pressure the government to follow the recommendations, the actions that were given to them,” said Sipkema.

Marching in solidarity Sipkema said they are sending a message.