Town signs off on $3 million redevelopment of Alder pool 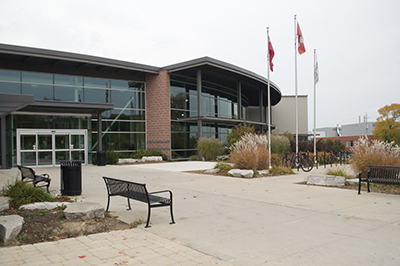 Orangeville Council has signed off on the $3 million redevelopment of the main swimming pool at Alder Recreation Centre in a move that one elected official believes effectively spells the end for the aquatic facilities at Tony Rose Arena.

The Town has known about the need to address numerous issues with both the main six-lane lap pool and leisure pool at Alder for quite some time. Installed in 2003, the vinyl liner on the main pool came with a 15 year shelf life. In 2018, the Town patched up around 260 holes and cracks in the liner as a temporary fix, but the repairs completely failed on Aug. 4 of this year, with the pool liner experiencing a major leak that resulted in water leaking into the building and spilling out onto Alder Street. The pool has remained closed ever since.

On Monday (Sept. 14), Ray Osmond, the Town's General Manager of Community Services, broke down the specifics of the redevelopment proposal to Council, which features a transition to an eight-lane, stainless steel swimming pool. In addition, the project will include an expansion to the smaller leisure pool, and the addition of a new therapeutic pool and indoor splash pad area.

“The design we have put on the table, centred around a stainless steel environment, is a more economical structure. It is more expensive, but in terms of economics and efficiencies, there would be zero maintenance (with the stainless steel structure). We would not be looking at a 15 or 20 year replacement, we would be looking at no replacement over a long, long period of time. Some (companies) say we could get a warranty for 50 years,” Mr. Osmond said.

He added, “These four components (of the redevelopment) will meet requirements for a full range in community aquatic programs and activities with state-of-the-art facilities.”

Originally, the Town had hoped the project could be funded through the Infrastructure Canada Investment Program (ICIP). Late last year, the municipality submitted a $35 million proposal to redevelop the Alder Recreation Centre. Under the terms of that agreement, the federal and provincial governments would have combined to cover around $25.5 million of the project, with the Town footing the bill for the remaining $9.5 million. However, Mr. Osmond revealed on Monday that the Town's application was denied back on Aug. 7.

With the Town now completely on the hook for the full $3 million swimming pool reno, there was some concern over where the funds to complete the work would come from. $750,000 was set aside in the 2020 Capital Budget for the project, while the remainder will be funded by municipal reserves over the next two years. Mr. Osmond says $1.75 million will be drawn from general capital reserves, which currently has a balance of $8.4 million, with $500,000 coming from the parks and recreation reserves, which has a current balance of $943,000. An additional $125,000, to pay for design work, will also be drawn from general reserves.

With the main pool at Alder currently out of commission, Coun. Todd Taylor felt Council had no other choice than to approve the $3 million redevelopment on Monday.

“As I think about the situation we're in, it really feels like we have a gun to the ear on this one. There aren't a lot of options. It's difficult to make half a decision, and half a decision here would be to stick with the status quo and replace a liner that's not adequate and doesn't work. This has been there, it's been an issue for quite some time now,” Coun. Taylor said.

While he commended the council of the day that made the decision to construct the Alder Recreation Centre, he feels they cut corners when it came to finalizing plans for the swimming pool. He would then go on to share his reservations over this substantial renovation coming in on budget.

“It was a beautiful decision made by council way back in the day, in my view, to build that arena. I think it's a wonderful building. Unfortunately, I think a mistake was made with the pool back in the day, and we have an opportunity to rectify that here,” Coun. Taylor said.

He added, “The one thing that does give me great concern is the money associated with this project. While this is such a believable report, I feel like there may be costs overrun here. I think we're probably talking about a greater than $3 million decision. But, really, what do we do other than go forward with the decision?

While the project does come at a great expense, there could be a considerable upside according to Andrew Perry, co-chair of the Orangeville Otters swim club. By extending the pool at Alder to eight lanes, and transitioning to a stainless steel tank, he feels that will enable the Otters to hold lucrative competitions here in town.

“Having a competition sized pool within Orangeville would allow us to bring in far more substantial competitions to the town. For example, when we hosted an event in Markham in 2018, we had to go outside the town and brought in 750 athletes over a full three days from 11 different clubs across southern and central Ontario,” Mr. Perry said. “We could be doing the same thing here in Orangeville.”

He added, “Going to eight lanes opens us up to hosting a regional championship level event, and larger invitationals. These events (could be lucrative) for us, and for the town. When you consider how many families would be coming in on, say, a Thursday night and staying through to Sunday – that's use of hotels, restaurants, all the corner stores, gas stations, on a full scale basis.”

Mr. Perry estimated the Otters could be in a position to host as many as five large-scale competition events over the course of their season once the redevelopment is complete.

While some members of Council were keen to separate this decision from a looming debate about the future of Tony Rose Arena, others felt strongly that the two issues were tied – Coun. Taylor included. It has long been suggested that any new investment in the pool at Alder would eventually lead to the closure of the aquatic space at Tony Rose, with the swimming pool at that location now more than 50 years old.

“I really do see Tony Rose tied to this decision. I agree there isn't much sense in making a decision today on where we're going to go (with Tony Rose Arena), but I would be hard pressed to spend additional money after this on swimming,” Coun. Taylor said. “I just don't know how we would do it, how we would fund it.”

Coun. Grant Peters wasn't on board with the renovation of Alder for that very reason.

“I worry that the decision to expand Alder is an implicit decision to close Tony Rose, and I don't think we're ready to make that decision yet,” Coun. Peters said. “We heavily debated spending $1 million on Harvey Curry Park (last year). While this report is very comprehensive, we're looking at spending half of our parks and recreation reserves, and a quarter of our general capital reserves on a single project. While I still wholly support the long-term vision (for the Alder Recreation Centre), and want to do this right if we're going to do it, I look at the size of this and other things on our plate and worry about the cost. Without the guarantee of a grant, with things like a (new) fire hall looming over us, it's a big cost.”

Mr. Osmond says the Town may be able to apply for a federal COVID-19 Resiliency Grant to help fund the redevelopment, with the Alder swimming pool project meeting the criteria for the program.

“We're pretty much ready to go to tender. As long as we start the project by Sept. 30, 2021, we can (qualify for funding), so we will definitely be looking at that. If we can get funding through that source, that would put us in a better position financially,” Mr. Osmond said.

The redevelopment of the swimming pool facilities at Alder will take some time to complete, with Mr. Osmond estimating it will likely be April before work is finished. In the meantime, all swimming and aquatics programs in Orangeville have been relocated to the pool at Tony Rose arena.