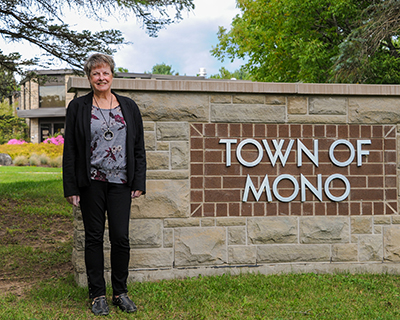 She is a business woman, a mother of grown children, a grandmother, a past School Board Trustee, a social activist, a past Councillor  and has been the mayor of the Town of Mono for the past three consecutive terms.

Laura Ryan is, by all accounts, a very busy woman. By the next election, she will have served the residents of Mono for 28 years and for the moment will not speculate on what the future holds.

Laura started coming to Mono as a child,  her mother, Dorothy Jane Needles, had purchased a property here, on the 7th Line, as a summer get away. It was her family's alternative to summer camp. Then her mother decided to buy an old historical building and create a restaurant, The Globe Restaurant in Rosemont. Laura and her brother were instrumental in the development of that project, producing the menu and the restaurant itself.

Laura's family is the same Needles family of theatre and the arts fame, with her father Bill Needles being instrumental in the formation of the Stratford Festival and her brother Dan Needles becoming a renowned playwright, author and raconteur. Her sister, living in Montreal is active in the arts, as was another brother, who lives near St. Mary's and acted as a young man. Another brother, who lives in Rosemont, became involved in various projects after the family sold the Globe, and of course Laura turned to public service and politics.

In this era of COVID 19, there have been new and potentially permanent changes and adaptations placed on not only people in general, but on the methods and rules of governance. Many councils are meeting virtually and others are having to look to new places in which to hold meetings, as their existing council chambers are simply not satisfactory for the new normals of social distancing and public participation. Mono, is fortunate not to have that problem impact them dramatically, but still they are holding virtual meetings for the moment as they try to navigate the reemergence of in person council gatherings.

Laura, who also serves on the Board of the Shelburne Arena, a multi faceted community entity, noted that, they are currently trying to decide if they will even put in the ice pad this winter. With all the new rules and guidelines regarding hockey, it may indeed prove to be realistically, not worthwhile. As much as residents enjoy their sports, keeping an ice rink flooded and open requires a considerable effort for the arena and considerable expense.

Laura first ventured into the world of politics when her children were both very young, her oldest was just starting kindergarten at Mono-Mulmur School and the issue of the gravel pit expansion was on everybody's mind, as it posed problems for health and safety at the school. She became involved with the parents' association and their response to the problems. It was at an outdoor event Laura was hosting about the gravel pit situation when a Mono councillor suggested that she become involved with the School Board and run for Public School Trustee, if she really wanted to make a difference. Laura applied and was given the position. She was in her early thirties at the time and remained on the School Board for nine years, serving as various chairs, including that of the Board itself.

Then the government decided to consolidate all the Boards and reduce the compensation for Trustees to $5,000 annually, while moving the meetings to Guelph. Laura decided to step back, at this point, but after a couple of elections, realized that she missed being a part of the process. Her opportunity quickly presented itself, when then Mayor John Creelman resigned to become a Justice of the Peace, thus creating a vacancy on Mono Council. Laura applied and was interviewed along with other prospective applicants. When the Council voted, it was a tie vote and in the ensuing straw vote, Laura lost. She lost but did not quit and in the following year's elections, she joined the Council ranks where she has remained to this day.

When asked if she will retire before this next election cycle, she replied that one never says never. It will depend upon many things and will be a decision made at that time as opposed to now. She did concede that it was a different time when she started out and things have definitely changed. The electorate has “ matured “ and there are certainly different attitudes about people's democratic rights and indeed about elections in general.

After two terms as a councillor and now three as being Mayor of Mono, Laura has a number of accomplishments of which she is especially proud, though not for herself, but for all of Council and for the Town. The Pan-Am Games comes to mind, as well as the Town Hall offices renovation, something well overdue. During her tenure, the Town has acquired land, which has been used for recreation and other facilities. The dynamics of Mono have evolved and it is now both rural and urban in nature. Consequently there are new challenges, such as building a more robust website and improving broadband internet access for the Town.

With Mono having such a broad dynamic it is very challenging to govern equitably. There are several different communities in Mono and getting them to play nicely together is not always easy for the Mayor and Council. This becomes especially apparent, said Laura, when particular issues arise that don't directly affect one area but do another. Getting the whole Town to realize that consideration has to be given to all of the residents can present major points of contention.

So looking ahead, what does the Mayor see for the future, both immediate and long term for Mono? Climate change and how it will affect plans was one area of thought. COVID-19 and how to deal with it's ramifications was another concern.

Having the municipal office full of staff is not going to be practical on a long-term basis. The Town will have to be prepared to be flexible and adaptive. Consequently a lot of technology changes have been implemented.

For the physical Town itself, things to consider have included the urban development prospects. Mono is not your typical town structure and currently does not have the services to deal with large development proposals. The lack of broadband is limiting  growth, as is the lack of a sewage system - everything in Mono is primarily on septic tank systems. The water requirements in Mono are pretty close to maximum at the moment. Looking at future development will require the implementation of new wells, which could be a problem as the rules and regulations for taking water are becoming more stringent all the time said the Mayor.

The future is moving towards home based businesses and the ability to have multiple dwellings on the same property is now an issue. Will they be detached, or apartments, granny flats etc. all come into play. All this will be directly influenced by the availability of high speed internet and Laura is adamant that the upper tier governments understand that this must be available to everyone and be affordable, so that no area is left out.

Laura personally would like to see more residents step up and participate in government. She would like to see younger generations becoming involved, just as she did at the beginning of her political career. It is a big commitment, but it needs to happen. She recalled that when she was first elected to the School Board, she was one of the youngest members, had two small children, was a single mum and had a full-time job, but it was something she felt was right.

When asked about problematic issues for Council, Mayor Ryan was quick to point out the current obvious ones, such as the Ritchie land fill issues, or the new micro brewery on Mono Centre Road, but went on to highlight several other areas of contention that are currently being dealt with. One of these was the upgrading and implementing of the Town's bylaws.

There is a new Fireworks bylaw being worked on, while Ryan said Council will always try to keep ahead of resident issues, determining if complaints are nuisance complaints of legitimate concerns, over safety or other things. There are numerous new commercial applications coming into the Town along it's southern border and these tend to occupy planning heavily. One plus of this activity is the extension of the Town water system along Hwy. 9 so that'll the car dealerships will soon be on Town water.

If the Mayor does decide to retire from politics and it is a big if,at the moment, what are her plans?

With all that is going on, she is taking it slow. She enjoys her pie selling business and despite the physicality of it, as long as her body holds out, she says she will probably die with a rolling pin in her hand. She wants to spend time with her two young grandchildren and see where their expectations lead them. She is willing to offer aid and insight to anyone who wants to take up the political mantle and carry on also.

With the world in such a flux, Laura says it is hard to know just what will happen or which way things may go. That said, one thing Mono can expect to count on, is the Mayor's unflinching commitment to serving the residents, of Mono, to the best of her ability and to provide the Town with good, solid government wit the support of Council and the guidance of staff.

Outside of politics, Laura Ryan will continue to provide Mono with the best pies in the County, hands down.