The memory of Redickville is all that remains 150 years later 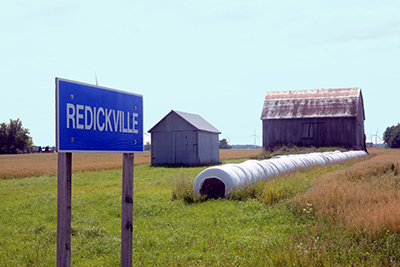 When passing through Redickville on County Road 124, north of Shelburne, the only indication that the corner even has a name is a sign announcing the town when you are heading southbound.

The area is still referred to as Redickville by locals, even though pretty much all that remains of a once thriving village is a memory and maybe some old barns.

George Redick founded the town when he settled there in the 1850's, and then gave the town his name.

He was a plasterer by trade, but with necessity being the mother of invention and innovation, he also opened a hotel and a tavern, which were pretty common enterprises in the early days of Dufferin County.

Travelling a considerable distance in the mid 19th century meant you most likely had to stop overnight to rest the horses. That accounted for the many hotels in the area. A large number of taverns in the region were kept busy as well as the settlers also enjoyed a drink.

Mr. Redick's was a respected member of the community and his hotel was also used to conduct official town business.

Within a few years, more businesses opened around his hotel.

The farmland in the area was considered to be high quality, so as farms began operating there was a need for farm services and supplies, which brought more people to the area.

In 1865 the town opened its first school house, with a Miss Brunker as the teacher. This log school house lasted until 1884 when it was replaced with a new brick school house.

In the 1870's the villagers built their first church. It was a Methodist church located on property owned by James Ostrander.

Mr. Redick kept things rolling in the town he founded. In 1879 he opened a post office.

Unfortunately, all fun has to come to an end someday, and in the mid 1880's, the Scott Act, which forbade the sale of liquor in hotels, pulled the plug on the liquor industry in the area, much to the dismay of local residents who looked forward to imbibing at the hotel.

Redickville had a boon in the 1880's. In addition to the general store the village had a number of people in the building and construction trades who not only helped build the town, they worked to help build neighbouring towns as well.

This included carpenters, a mason, well digger and a blacksmith shop.

By the turn of the century the village had grown to around 100 people and was a bustling little place.

In 1907, a second general store was opened by George Mortimore who also doubled as the town's postmaster.

Like many small rural Ontario communities, the 20th century began to see the town shrink as people moved away for better opportunities.

The church, which became the Redickville United Church in 1925, closed around 1963 and was later demolished.

The school also closed, however it is still standing as a private home.

The corner where the hotel once stood at Country Road 24, and County Road 21, offer no indication that a thriving town was once there. The dominant feature of the area now are the windmills.

Redickville as a town faded into history but the memory of the pioneer spirit lives on.