No alcohol, no railway relegated Whittington to history 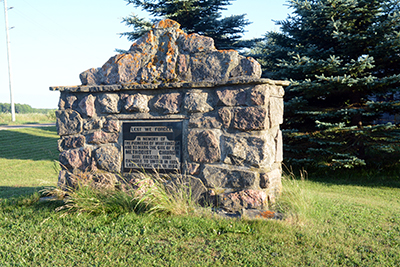 One thing is for sure, early residents of the region sure enjoyed a drink.

In fact a law banning the sale of alcohol in hotels was one of the reasons the former town of Whittington in Amaranth faded into history.

Whittington was located at what is now the 15 Sideroad and 2nd line in Amaranth.

In the 1850's and 60's, Amaranth Township offered more than its fair share of watering holes along the route between Owen Sound and Brampton.

Whittington sprang up as a rather popular stopping point for stage coaches and visitors.

It was the Whittington House, a well known hotel and tavern, that was the big attraction.

The hotel was owned by Richard Bowsfield (also spelled Bousefield) and built around 1858.

Despite its rather remote location at the time, the Whittington House became a popular place to stop for the night, get a hot meal, and a shot of whiskey.

One half of the building was used as a hotel while the other half served as a general store and post office. The post office opened in 1861.

Mr. Bowsfield was quite the entrepreneur. Around 1862, he along with his partner, William Lewis, started a daily stage coach that ran from Brampton to Owen Sound.

If you're going to run a stage coach, of course you would make sure it stopped at your own hotel to give passengers a break from the rigors of travelling on a poorly constructed dirt road of the time.

They ran the stage coach for about ten years, until the railway laid tracks to service the route.

The success of the Whittington House prompted others to open businesses nearby.

Another establishment was built, called French's Hotel and Dance Hall. Unfortunately, French's burned to the ground in 1873 under mysterious circumstances, although the the fact that there was two competing hotels across the street from each other raised raised some eyebrows with a lot of suggestion that it wasn't an accidental fire.

An Orange Lodge was built in 1861 on land donated by a man named David Spence. Apparently Spence was the only teetotaler in town as he specified that the lodge could never be used for dancing and liquor was strictly forbidden on the premises.

A school house was built for the town and a couple of churches, one Anglican, the other Methodist, were built so the local alcoholic community could repent on Sunday mornings.

A general store, saw mill, and blacksmith also set up shop in the town.

The Town also had a fairly sizable fall fair complete with horse racing.

The arrival of a rail line in the late 1800's was a huge boon to any town in Ontario. Unfortunately for Whittington, the owner of the lot that was suitable for building a train station decided he didn't want to sell.

The Toronto, Grey and Bruce Railway, thanked the town and re-routed the line to stations at Laurel and Fraxa.

That was the first nail in the lid that started shutting down activity in Whittington.

When the Scott Act was enacted in the mid 1880's, forbidding the sale of alcohol in hotels, it pretty much put an end to what was up until them, a profitable business.

Eventually the hotel closed and people moved away.

The buildings were all torn down over time and most of the land was reverted back to farmland.

Today, only the school house remains and is now a private residence.

A small cairn marks the spot where the church once stood.

What began as an enterprising new settlement ended when the temperance movement doused the entrepreneurial spirit in the tavern business and sent those wishing to bend their elbow at the bar to other locations for a drink and a night out.