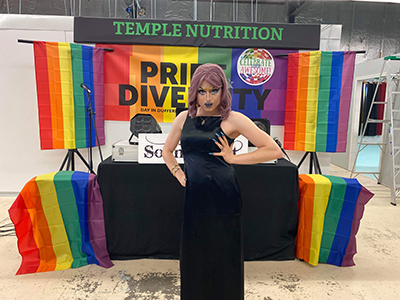 “Now, more than ever, we need to make sure our LGBTQ community knows they have our full support.”

While Pride Month, alongside practically everything else, may have been somewhat overshadowed this year due to the ongoing COVID-19 pandemic, recent comments made by one Dufferin County politician made it “absolutely vital” for the third annual Celebrate Your Awesome, the region's popular Pride event, to take centre stage this past weekend.

On Saturday (June 27), this year's Celebrate Your Awesome was held in a virtual format, bringing thousands of people together from across the community to, well, celebrate everything that makes them awesome.

“We made the decision, as a committee, two months ago. We saw how much other organizations had hosting online events, and decided to make this a bit of an at-home party,” said Lisa Post, one of the founders of the event. “By moving forward and holding an online party, we're sticking true to what we do – we want people to have fun, celebrate and be themselves.”

At its peak on Saturday evening, the Celebrate Your Awesome live feed, which aired on Facebook, had more than 2,000 viewers. While the feed dropped out on a couple of occasions, it didn't seem to stop anyone involved from continuing on with the fun. The feed aired live from a warehouse in Orangeville, and highlighted a professional DJ, while also presenting an opportunity for Celebrate Your Awesome committee members to stop by and say a few words.

The feedback to the event has been “amazing”, says Ms. Post. That particular point is important, she believes, considering the damage controversial comments made by Amaranth Mayor Bob Currie last week did to the local LGBTQ community.

He would then question why he would want to support Pride, when, if everyone were either gay or lesbian, “this would be the last generation on earth”.

His comments have been widely criticized, with many local dignitaries condemning his views. An appearance on Newstalk1010 last week, with Jim Richards, saw Mr. Currie essentially “double down”, as Mr. Richards described it, refusing to apologize for his comments and, going one step further, stating “I don't support that lifestyle” when referring to same-sex relationships.

Ms. Post, who also serves as a member of Orangeville Council, was dismayed when she heard the comments.

During a recent meeting of Dufferin County Council, after Ms. Post had made a brief presentation highlighting the fact the third-annual Celebrate Your Awesome was taking place, Mr. Currie remarked that he had “no idea in the world” what Celebrate Your Awesome means, stating there is no part of the body designated as, or named awesome.

“This should not be camouflaged. Let people know exactly what you're celebrating. Awesome, to me, doesn't mean a thing,” Mr. Currie said.

In response, Ms. Post opined that Celebrate Your Awesome is not disguised in any way.

“We're not trying to hide that we're a Pride-based event. Celebrate Your Awesome is about including everybody. That's why it's named that way. It is an event that celebrates who you are as a person. It celebrates everything that makes you unique. Every person's differences are valuable, and Celebrate Your Awesome allows all people to come together from different races, religions, creeds, sexual orientation and genders and feel comfortable together,” Ms. Post said. “We want to celebrate everything that makes each one of us awesome, because that's what makes us a unique, diverse and amazing community.”

The issue was discussed at length during a recent video posted to the Town of Orangeville's YouTube page, titled ‘Diversity Series – LGBTQ'. There, Mayor Sandy Brown gathered with Ms. Post, fellow Celebrate Your Awesome committee member Ricky Schaede, and Theatre Orangeville duo Becky Morris and Sharyn Ayliffe to discuss the recent comments made by Mr. Currie, and the overall thoughts of diversity in Orangeville and Dufferin County.

Each individual took their turn to speak, with Mr. Schaede believing the comments made by Mr. Currie was setting a bad example for people in our community. There has, in Ricky's eyes at least, been one positive to come out of all of this.

“We have had a tremendous outpouring of support from the community. There's a petition going (that has over 14,000 signatures), there's been lots of messages of hope, inspiration and support for the LGBTQ community,” Mr. Schaede said.

He added, “Humanity is this beautiful tapestry of all these different types of people. What that tapestry needs is more uniqueness, more beauty, not more of the same. Don't be afraid to be who you are.”

“Those who have a platform to speak, to lead, my call is to them to really take the opportunity to spread positivity, to spread education, to spread a message of love and acceptance. That last part is key – not just tolerance, but acceptance,” Ms. Ayliffe said. “Acceptance of your fellow community members – your neighbours, your family, your friends. There is an opportunity there to take the focus away from those who choose to spew an ignorant belief and uneducated opinion and really turn the focus to positive motion forward.”

With the third-annual Celebrate Your Awesome event now in the books, Ms. Post is looking forward to building on the momentum generated over the past three years to ensure the local LGBTQ community receives the support it needs.

“For us, pride, inclusion and diversity is top of mind. With this event, we want to make sure that, through Pride Month, there is a way for all of us to stick together as one community. Now, more than ever, we need to make sure our LGBTQ community knows they have our full support,” Ms. Post said. “With the recent comments that have been made, it's even more important to spread a positive message and let our community know they're safe, and that (Mr. Currie's) feelings aren't in the majority. They need to know they can still feel safe and welcome in their own home.”