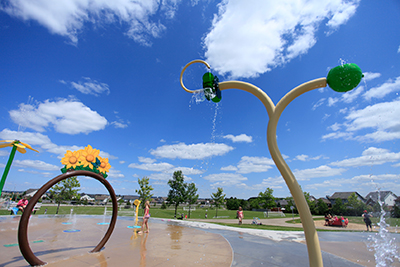 The Town of Orangeville is opening its splash pads at Fendley Park and Everykids Park this Friday (June 24), although municipal officials have warned they will have no choice but to close the facilities if families do not adhere to several new safety protocols introduced at the sites.

After the provincial government announced earlier this week that splash pads could reopen, Town staff have been working alongside public health officials to satisfy their requirement for a safe relaunch. Ray Osmond, the Town's General Manager of Community Services, revealed there will be a limit to the number of children allowed to access the splash pads at one time, while users will be expected to maintain a safe physical distance from one another.

“Splash pads, by their very nature, are a huge draw for kids. We know the sites are going to be very busy. It's going to take a lot of cooperation by various people involved, parents in particular,” Mr. Osmond said. “Maybe after a child has spent so many minutes on the pad, their parents could bring them off and allow other children on. There's going to have to be a lot of sharing space, a lot of cooperation and a lot of patience.”

There will be staff on site at the two parks for the first week of their reopening to educate both parents and children about the various safety measures and protocols in place. If Mr. Osmond finds there are too many issues with the reopening, he will have no other option than to close them once again.

“The big thing here is parents need to be very much aware that they need to be on top of their child when it comes to the splash pad area. If we find we're having problems with numbers, problems with congestion on the pads, we'll have no option but to shut these things down,” Mr. Osmond said.

The splash pads will open at noon on Friday.

News regarding the potential reopening of the municipal swimming pools, located at Tony Rose Arena and Alder Recreation Centre, was a little less positive on Monday, with Mr. Osmond revealing a myriad of issues to council.

The business model for recreational centre aquatics programs, Mr. Osmond says, is based on large participant volumes. With COVID-19 enforced restrictions still in place, the town is prohibited from running their programs as they usually do.

“The protocol for aquatics, coming out of (Swimming Canada), is we can only have six swimmers in a pool swimming at one time, and only a certain number of people in a pool for aquafit programs. Those numbers are going to be very difficult to work with,” Mr. Osmond said.

In a typical year, the Town would see revenues of approximately $2.9 million from its aquatics centres and programs. Mr. Osmond estimated that, even in a best case scenario, the Town would recoup around $750,000 this year.

While Council could decide to relaunch its swimming programs, they would be run at a considerable loss, given the low number of participants and additional staff that would be required to meet provincial guidelines.

On top of that, there's a significant problem with the main swimming pool at Alder. Built in 2003, the vinyl basin at the main pool is at the end of its 15-year lifespan. Back in 2017, repairs were carried out to extend that life-span, but Mr. Osmond says we are now at a point where the pool requires significant investment.

The Town had applied for a grant through the Investing in Canada Infrastructure Program (ICIP), to expand the pool and replace the liner, but that, as of press time, has not been approved. Having run into issues with the vinyl basin on several occasions over the past 17 years, Mr. Osmond said he would be in favour of installing a new stainless steel basin when it comes to upgrading the pool.

While he didn't have any projections regarding how much such a project would cost, he indicated now would be the perfect time to complete it given aquatics programs are suspended due to COVID-19.

“Aquatics won't generate a lot of revenue this year. If there's a time to do the job, it would be sometime in the next few months when we're in this kind of shutdown,” Mr. Osmond said.

Moving on, Mr. Osmond says staff are currently planning on putting in ice at Tony Rose Arena and Alder Rec Centre in August, after the provincial government ruled ice pads can now be used for skill development, with a maximum of 10 people on the ice at a time. Players will not have access to dressing rooms or benches under the new regulations.