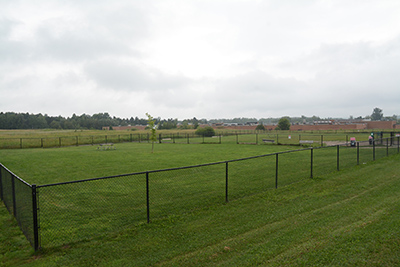 Municipal staff is asking Orangeville Council to approve a proposed multi-million dollar redevelopment of land behind the Orangeville Mall.

In a 36-page report submitted to Council, the staff has recommended the municipality approve a revised development proposal that will see 541 units – 207 townhomes, and 334 apartments – constructed on approximately 44 acres of land along Hansen Boulevard.

The report following years of back and forth between the Town, developers Orangeville Highlands Limited and Brucedale Investments, Credit Valley Conservation, both the Ontario Municipal Board and Local Planning Appeal Tribunal (LPAT) and a persistent community activist group, Town Planner Brandon Ward and Doug Jones, General Manager of Infrastructure Services,

“Staff is of the opinion that the proposal is consistent with the Provincial Policy Statement (PPS), confirms to the growth plan, as well as the policies of the County's official plan, and the Town's official plan,” the report reads. “It is therefore recommended that Council support the applications in their present form.”

Also included in the renewed proposal is a four-acre community park, one-acre dog park, an integrated multi-use trail system and a stormwater management facility. The developer has also agreed to designate approximately 15.5 acres of land at the site as open space conservation area, essentially meaning it will not be developed.

In adjusting its application at the site – an original proposal in 2018 called for 623 units - it would appear the developers have offered something of a compromise in an attempt to avoid a lengthy LPAT hearing and tribunal process. One of the main concerns many members of Council had with the development was the proposed density, which, although falling in line with the Town's bylaws, would still be quite substantial considering there are likely be at least 1,000, likely closer to 2,000 residents living in the new development.

While Mayor Sandy Brown has always spoken favourably about developing the lands behind the mall, even he expressed concern over the originally proposed density back in early 2019.

“My personal stand on this is that this is good development land. That land, at some point, will eventually be developed. I'm not entirely in favour of increasing density, I'd like to see that scaled back a bit, but this is good land,” Mayor Brown said.

He pointed towards the town's need for affordable housing as his main reason for supporting the project. The Citizen obtained a copy of an email Mayor Brown sent out to a member of the Hansen High Density Awareness Group (HHDAG), the organization founded in 2017 to oppose the proposal, which indicates where his vote will likely lie on Monday.

“I am confident that our planning department has put the developer through the necessary rigorous consultation and reporting measures required for a development of this size,” Mayor Brown wrote. “There is no chance, zero chance, that this development will overtax our municipal systems. This development, in my opinion, will be moving forward with some modification.”

That final point, regarding the overtaxing of municipal systems, is a direct reference to the argument, put forth by HHDAG, that the development project would significantly impact Orangeville's water supply and quality, while also significantly increasing traffic in the area, something they argue will damage local roadways.

Speaking to the Citizen earlier this month, Dorothy Pedersen, head of HHDAG, feels that the collective voice of the group's 12 active members has not been heard throughout this process.

“It seems to me that so much of what we brought to the fore with meetings with Council has been, generally, getting dismissed.” Ms. Pedersen said.

As well as the fears this development will stretch municipal infrastructure – something Mr. Jones addressed, and denied in his report to Council – Ms. Pedersen says the project will “leave an ugly scar” on the community, and significantly impact, perhaps even kill, the natural habitat of dozens of species who currently call that land home.

She argues the development goes against the Town's official plan, and heavily criticized the provincial government's Places to Grow Act, which is being used as a key argument in favour of the development. In that legislation, Dufferin County has been asked to grow its population to approximately 85,000 people by 2041. The current population is 61,735 as per the 2016 census. Orangeville is expected to take on the majority of that growth.

“There's been so much density legislated by the provincial government. This is something I have a real issue with. The Places to Grow Act is essentially dictating to us what should be going into our community. It's a horrendous piece of legislation,” Ms. Pedersen said. “For people who don't live in this municipality and have nothing at stake about what goes on here, to dictate to us how our municipality is going to grow, unnaturally, and to what degree, that's dictatorship. We're not supposed to live in a dictatorship, this is supposed to be a democracy.”

She added, “This proposed development is just not complimentary to our community at all, in fact it's extremely destructive. It completely changes the entire tone and physical appearance of Orangeville.

“I think most people would be content if any development that went in there was compatible with the adjoining neighbourhood, because what is being proposed right now isn't. That makes it in opposition of Orangeville's official plan. That plan states that any new development will fit with its neighbours, harmoniously with its surroundings. This proposal is anything but that, and is going to have a huge impact on the neighbourhood,” Ms. Pedersen continued.

The Hansen High Density Awareness Group met with Mr. Ward and representatives from Credit Valley Conservation back in January in an attempt to get their point across. Unfortunately, Ms. Pedersen states, the meeting didn't go well.

“It was a very disappointing meeting. We came away from the meeting feeling we were just being paid lip service,” Ms. Pedersen said. “Frankly, I felt several of our members were more informed about some of these issues than CVC were. It just seemed like things were going through with a rubber stamp, and our thoughts didn't matter.”

That's not an opinion some members of Council want to give credence to. Coun. Todd Taylor has informed the Citizen he will be voting against the recommendation to approve the project, while Deputy Mayor Andy Macintosh opined that “we should not be dealing with this until the state of emergency is over”.

Coun. Taylor shared a post on social media, asking the public how they felt about the development. The majority of the comments seemed to be in favour of the project, while Sylvia Bradley, a former Orangeville councillor, made an interesting point, shedding some light on the reality of the situation from the Town's perspective.

“Many people think that Council has more power than they do. The owner of the property is entitled to develop it within the perimeters of zoning, official plan, Places to Grow, etc. If it meets those requirements, personal feelings about the project have no impact on the right decision,” Ms. Bradley wrote.

The developers have already taken the Town to LPAT, submitting an appeal to the provincial authority, as they felt the municipality was unnecessarily dragging its feet with this project. A hearing was to commence on May 25, although those plans have been nixed due to the COVID-19 outbreak. If Council were to approve the development on Monday, there would be no need for the 10-day LPAT case to move forward. Instead, a video conference could be scheduled in June to formalize details of the agreement.

“Additional site-level approvals would still be needed before home construction can begin. Installation of infrastructure could commence within a year of draft approval, however a developer typically has up to three years from the draft approval date to fulfill all conditions,” Mr. Ward informed the Citizen.