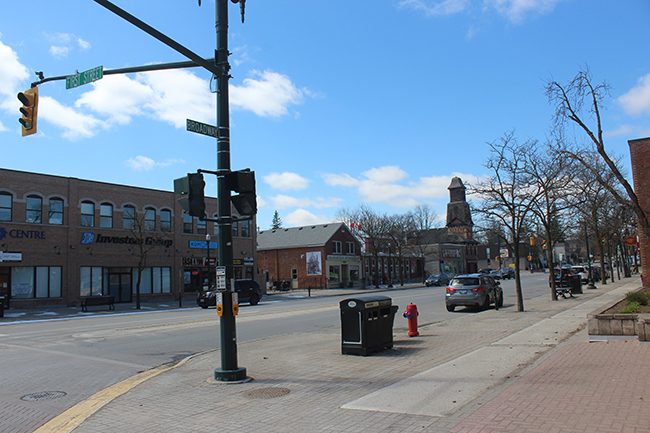 A collection of Orangeville business owners, as well as the organization charged with looking after the downtown core, have criticized a recent Council decision that will see a two-way bus terminal installed along Broadway.

Having been placed in something of a political purgatory for the better part of five years, with Orangeville's previous council, who first introduced the idea of developing a transit transfer terminal in town, unable to agree on a location, the project was given the green light on April 22. It was determined by a majority of Council, in a 5-2 vote (Deputy Mayor Andy Macintosh and Councillors Joe Andrews, Grant Peters, Lisa Post and Todd Taylor for, and Mayor Sandy Brown and Coun. Debbie Sherwood against) that Broadway, between First St. and John St., would be an ideal home for the terminal. In total, five potential spots across town were considered during the selection process.

The decision took many people who work in Orangeville's downtown core by surprise, not least Terrence Carter, Managing Partner of the Carters Professional Corporation law firm. Carters has been a staple of the Broadway business community for more than 20 years, situated at 209 and 211 Broadway, directly in front of the proposed bus terminal site.

“I am writing to express the serious concerns and opposition of myself and my colleagues to (this) decision,” Mr. Carter stated in a letter addressed to Council. “No one from the Town of Orangeville Transit Task Force, Town consultants, or anyone else on behalf of the Town contacted Carters or, to my knowledge, any other property owners or stakeholders that will be affected by the decision to relocate the transit transfer terminal to its proposed new location on Broadway.”

He added, “The failure to do so demonstrates an appalling lack of concern or interest in the businesses and stakeholders that are going to be directly impacted by Council's decision.

“If Carters had been consulted, I would have advised that Council's decision will drive business away from locating in the already congested area of Broadway because of further increased traffic congestion, bus fumes and a significant loss of parking in front of properties,” he continued.

In total, 11 parking spaces will be removed from the downtown core to make way for the transit terminal. That was the main point of contention for the Orangeville Business Improvement Area (OBIA). Included in the agenda at the April 22 Council meeting, but not discussed or referenced by Council, was a letter from Alison Scheel, OBIA General Manager, asking that Council consider other locations for its proposed bus terminal.

She said the loss of 11 parking spaces would severely impact the downtown area. At peak times during the day, it is difficult to find a place to park, which Ms. Scheel says drives away potential customers.

The OBIA has invested approximately $1.3 million over the past 10 years to improve the downtown parking capacity, adding around 150 parking spots in lots behind Broadway. Ms. Scheel estimates it would cost roughly $187,000 to replace the on-street parking spaces with off-street parking spaces.

“A lack of convenient parking is the top complaint from customers and business owners,” Ms. Scheel told the Citizen. “The OBIA was really disappointed in Council's decision. It was not something we wanted to happen. We feel there are other locations better equipped to take on the transit terminal.”

She added, “We were absolutely shocked (when we heard the decision had been made). The BIA Board was given the opportunity to provide input on behalf of the Area as a whole, but we were still surprised to hear that Council was voting on the issue during the current emergency.  The BIA is very disappointed to learn that businesses in the area were not informed as part of a public consultation process.”

Ms. Scheel feels the best spot for transit terminal is the previously proposed location on Centre Street, in front of the Edelbrock Centre. Much work was carried out on that particular proposal from 2017 to 2019, which went as far as Town staff developing a site plan that would have seen a lay-by lane introduced at the site. Eventually, the site on Centre Street was scrapped due to its close proximity to the community garden, where volunteers grow fruits and vegetables for themselves, local residents in need and the Orangeville Food Bank.

“Urban harvesting programs are popular in major cities all over North America, and the food gathered from these gardens are not considered to be contaminated from vehicle exhaust,” Ms. Scheel retorted. “Further, the community gardens and orchard can be moved to another location accessible by the Town's bus route.”

Frank Gray, owner of 229 Broadway, feels the removal of 11 parking spots would severely impact the 10 businesses currently operating out of his building.

“Over the past 60 years I have created 85 parking spaces, at great expense, that now are very important to my tenants, as well as to some of my neighbours that don't have off-street parking. If these (11) spaces on Broadway, which are close to my property, are given to the transit (terminal), then my 85 parking spaces will be even harder to control for my 10 tenants, their customers and employees.”

He continued, “Council should not make any wrong moves that might jeopardize the delicate balance of the small businesses (along Broadway). The loss of parking from John St. to First St. is not supporting this fragile area. Council should not transfer this transit problem to the downtown core.”

Mr. Carter feels the ideal location for the bus terminal would be the Westdale Mall site at 286 Broadway, which currently houses businesses such as The Beer Store, Bowling on Broadway and Freshco. His main gripe with the recently approved location centres around safety. In his letter to Council, Mr. Carter says he often witnesses people parking their car on one side of Broadway and crossing the busy road to get to a business on the other side. This practice, he feels, will be exacerbated by the installation of a two-way bus terminal.

“Riders who will need to transfer from a bus on one side of Broadway to another bus on the other side will predictably become involved in jaywalking in the middle of the block to get to their next bus quickly, instead of going the much slower route of walking to either the end of the block to use the traffic lights at First Street or John Street,” Mr. Carter said. “It is just a matter of time before someone is going to be badly injured, or worse, killed in trying to get across Broadway to catch a bus, or shop, by coming out into traffic in front of or behind a parked bus, when visibility to oncoming traffic will be limited, particularly when an emergency vehicle is having to speed along Broadway.”

He added, “Surely Orangeville Council can do better than to create this needless risk to public safety. If not, then the Council members who voted for the relocation of the transit transfer station to a fundamentally unsafe location on Broadway will carry the dubious legacy of being responsible, morally at least, for the harm and injury that will eventually occur, and resulting liability exposure the Town will be facing.”

After a Facebook post criticizing Council's decision received substantial attention online, Coun. Grant Peters went on record to say that, in his belief, Council did what it could to ensure those who wanted to be engaged during the process were, and that the correct decision was eventually made.

“This process took almost three years, and had significant public input, including the local businesses. It has been on the Council agenda three times since we took office,” Coun. Peters said. “The BIA was involved and informed. Not all businesses are opposed to this location. I am for this location – a transit hub should give its riders access to the most amenities possible – in this case, our downtown. It is also the least-cost location, and allows for a four-route cloverleaf pattern, which will increase the number of households with access to the system.”

He added, “All citizens and businesses had the chance to speak on the topic – both at the public committee meetings, as well as Council meetings.”