Teachers explain why they are on strike in Orangeville 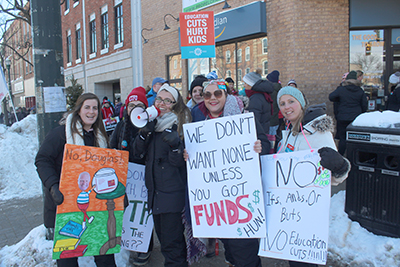 Many of the teachers interviewed while picketing in Orangeville this week were prohibited by their unions from giving even their first names or say what school they were from; this was as a result of instruction they had been given in the event they were approached by the press (us). They said this was to avoid miscommunication between the official stance of the union and how their own opinions might differ.

The day was cold with a biting wind rushing up and down Broadway, freezing fingers and noses.

A large number of teachers and supporters had gathered and were moving in groups on Broadway on Tuesday, for the majority of the day, with two shifts, from about 10:00 a.m. until noon and the second coming into cover until 3:00 p.m.

“It's not about the money,” said every one of them. “That's not it at all. The kids are coming to us with all sorts of problems. So, their parents might not know that red food colouring can hurt their kids – that if they'd give them fruit and water instead of cookies and sugary drinks, that might help with behaviour.”

We were hurrying along Broadway, beside a couple of ladies, carrying signs: “Support our students needs.”

They were “moving on – we have to move on [not to obstruct the sidewalk]. There's a sort -of base at the bottom of First Street, here on Broadway.”

There was a basic station, a table pushed to one edge of the sidewalk with piles of Tim Hortons cups and plastic boxes of goodies – cookies, muffins purchased at Timmie's; muffins made at someone's home, with a note on it, saying “we love you!”

Teachers and supporters were loosely gathered there in clusters with their greetings to each other, best wishes, inquiries after the well being of family. We stood in the periphery, looking to interject questions.

Primarily women, they took us into their small circles and spoke rapidly, as if to convey the urgency that grips them.

One asked us, “Why does Doug Ford want to model us after education in the United States? He wants to copy how they educate their kids in Alabama. Their education isn't nearly as good as here.”

One person after another told us, “This is about the class size and the cutbacks of ECE's [Early Childhood Educators] or EA's [Education Assistants]. There's no way one person can handle 30 to 35 kids, especially if there's no one else there for the special needs kids.”

“These people are absolutely valuable,” said one of the group, we were talking to, Wendy. “And the office administrators – they're massively important.”

An older man came up to us to talk, “I'm a retired teacher and I'm here to support my colleagues. It's so important that we save all-day and junior kindergarten.”

One teacher told us her name is Mary, “It's basically the cuts to kindergarten. It's going to be a struggle. The size of kindergarten is between 18 and 25 but there's no cap to how many students can be there. If the EA's are cut, how would one teacher manage? If things get even a little out of order because one child breaks a toy or throws something ...”

“The model of the classroom has changed,” one lady told us, well bundled against the cold, her hood pulled up around her face. “There are more students with special needs who need support, both emotional and for behaviour. We have to make sure that the kids have a chance to learn.”

“An inclusive classroom,” Peter, a male teacher, commented. “I love what I do, as an early educator, working with young children. But we just need the funding – not cuts. The Liberal government opened up to make this possible.

“We're frustrated because we don't feel we can do our jobs. The number of kids with needs are increasing every year.”

We asked for why they think that is and they have their ideas, based on what they see in the classrooms: “The sort of things kids bring for lunch with too much sugar and food colouring in the drinks. Lots of them aren't getting enough sleep because they come to school and say they were at some sporting event and didn't go to bed ‘til late. They come to school, saying how tired they are. When they're home, they're spending too much time on a screen. And if their parents are stressed and going a hundred miles an hour, then the kids pick that up and they're stressed too.”

The impositions placed on teachers about what they cannot say: “We're not allowed to talk about what should be in the lunch boxes anymore. Fruit and healthy snacks instead of cookies, for example, – that's called ‘lunch shaming'. They think we're telling them how to parent their kids,” a couple of teachers told us, huddling a bit defensively. “We have to be careful about everything – it's really difficult.”

“I'm teaching grade three,” said a person standing by, taking up the conversation. “We know cuts affect everybody. We want to make sure that we get the best education. We love the kids and that's what we're doing out here.

“And this business of having to do online courses. Lots of kids live in the country where there is no internet and, here, the schools don't have the broadband to accommodate all that work. They already know this doesn't work. Why are they pushing it? Too many kids wouldn't be able to do the work on their own.”

We had not come to the safety issue of difficult or rough behaviour yet, but Wendy raised it, “Nobody should be afraid. That's why we have CYC's (Child Youth Counsellors). They're seeing a rise in mental health issues and there are more violent incidents reports coming from teachers in the classrooms.”

She and the others we were talking to nodded in reticent acknowledgement that they have suffered physical violence from students in the elementary schools where they teach.

One lady approached the group with a sign strapped to her body, written up in neat letters: “I am walking for my granddaughter.'

Said she, “My granddaughter will start school in two years and I understand these cuts will take those supporters out of the classroom. Then all the attention of the teacher will have to go to the child with the special needs and not on the actual lessons in the classroom. My children had a wonderful Ontario education right up through high school. Who will supervise if they cut teachers back- who will run the sports and clubs after school, if the teachers are cut?”

A librarian talked to us: “Life with these cuts – the class sizes will be crazy and I don't even know if there would be any more libraries. Junior classes [grades four to six] now are 28 kids. If you increase the size of the classes – they're in portables – it will be impossible.”

She said: “Teachers are trying to meet all the needs: social, educational and emotional.”